Pray for the Fulbe 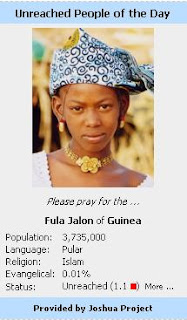 Today, I was glancing at my blog when I saw the "Unreached People of the Day" banner was the people group that we worked with when we were in West Africa! They call themselves Fulbe, but they are members of the largest people group in West Africa, the Fulani.

Missionaries have been among them since the 1920's, but, when we were there, there was only an estimated 250 believers and only half of them had been baptized.

Pray that the Fulbe's hearts would be opened to the Gospel. Pray that the spiritual strong-holds would be broken and that Satan's grip on them would be restrained.

Last week, the dictator of the country died. Immediately, there was a military coup. The new dictator is promising elections in two years. Pray that God would use this event in the lives of Guineans to bring the whole country to himself!

Pray for our missionaries who continue to serve in difficult situations in Guinea. Pray for their health, safety, boldness to witness, spiritual discernment, endurance and faithfulness.
Posted by Rick Boyne at 8:02 AM