High points include my older daughter turning 16 and getting her first car and our family in the process of purchasing our own home.

Low points include being betrayed by then gossiped about by people whom I trusted and regarded as friends and the passing of my grandmother.

Fun activities have included being recreation coordinator at children's camp, working with Southern Baptist Disaster Relief in Creek County and New Orleans, and going to Southern China and Hong Kong with a group of pastors from Oklahoma.

I don't know what 2013 holds in store for us, but, I'd recommend storing up a few things like firearms, ammo, and survival resources. The world is falling apart at the seams.

Nevertheless, God is in control.

Thank you for reading RickBoyne.com this year! May God bless you for a Joyous and Healthy New Year!
Posted by Rick Boyne at 5:10 PM No comments:

Here is my Sunday morning message, "From the Cradle to the Cross" based on Luke 2:2-21 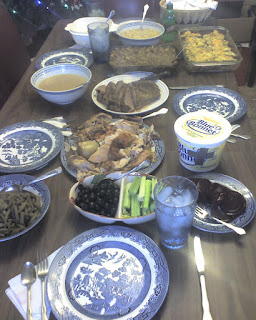 As we celebrate Christmas today, remember that it is more than presents and being with family. Today, we celebrate the birth of the Savior of the World, Jesus Christ.

Now in those days a decree went out from Caesar Augustus, that a census be taken of all the inhabited earth. This was the first census taken while Quirinius was governor of Syria. And everyone was on his way to register for the census, each to his own city.


Joseph also went up from Galilee, from the city of Nazareth, to Judea, to the city of David which is called Bethlehem, because he was of the house and family of David, in order to register along with Mary, who was engaged to him, and was with child.

While they were there, the days were completed for her to give birth. And she gave birth to her firstborn son; and she wrapped Him in cloths, and laid Him in a manger, because there was no room for them in the inn.

In the same region there were some shepherds staying out in the fields and keeping watch over their flock by night. And an angel of the Lord suddenly stood before them, and the glory of the Lord shone around them; and they were terribly frightened. But the angel said to them, "Do not be afraid; for behold, I bring you good news of great joy which will be for all the people; for today in the city of David there has been born for you a Savior, who is Christ the Lord. "This will be a sign for you: you will find a baby wrapped in cloths and lying in a manger."

And suddenly there appeared with the angel a multitude of the heavenly host praising God and saying, "Glory to God in the highest, And on earth peace among men with whom He is pleased."

When the angels had gone away from them into heaven, the shepherds began saying to one another, "Let us go straight to Bethlehem then, and see this thing that has happened which the Lord has made known to us." So they came in a hurry and found their way to Mary and Joseph, and the baby as He lay in the manger. When they had seen this, they made known the statement which had been told them about this Child. And all who heard it wondered at the things which were told them by the shepherds.

But Mary treasured all these things, pondering them in her heart. The shepherds went back, glorifying and praising God for all that they had heard and seen, just as had been told them.
(Luke 2:1-20 NASB)


Jesus can save you and literally be your Savior if you trust Him to do so. Email me if you'd like more information about having your sins forgiven.
Posted by Rick Boyne at 1:00 AM No comments: 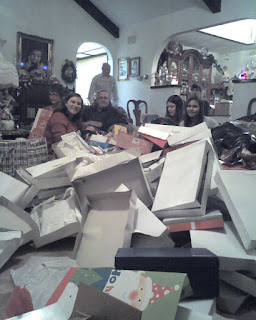 Posted by Rick Boyne at 9:13 PM No comments: 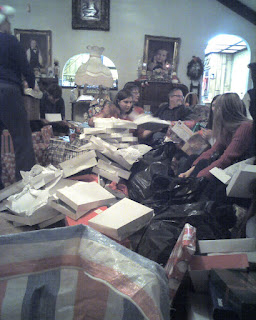 Posted by Rick Boyne at 8:53 PM No comments: 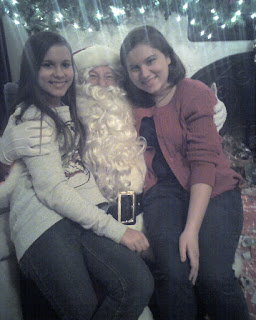 Posted by Rick Boyne at 8:30 PM No comments: 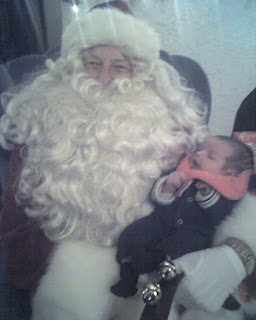 Posted by Rick Boyne at 8:25 PM No comments: 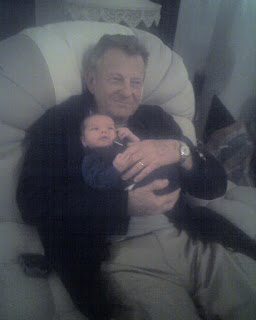 Posted by Rick Boyne at 7:22 PM No comments: 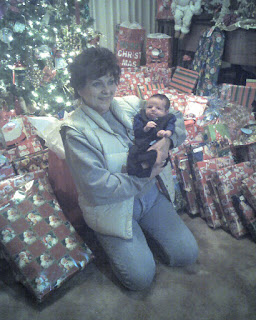 Posted by Rick Boyne at 7:19 PM No comments:

Merry Christmas from the Boynes! 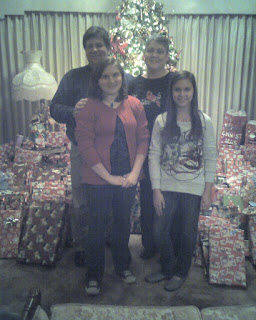 Posted by Rick Boyne at 6:28 PM No comments: 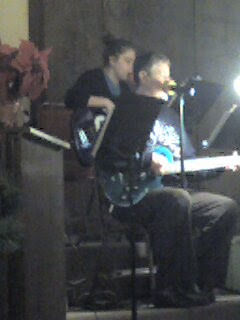 Posted by Rick Boyne at 6:32 PM No comments: 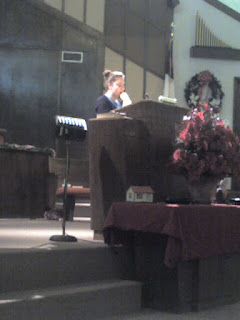 Posted by Rick Boyne at 6:21 PM No comments: 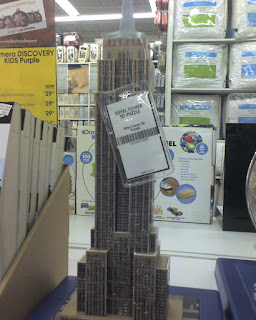 Posted by Rick Boyne at 7:47 PM No comments: 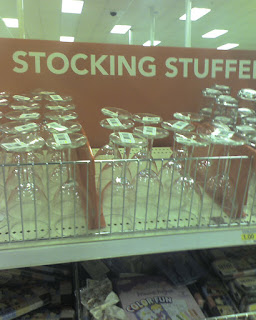 Posted by Rick Boyne at 5:24 PM No comments:

End of the World?

We're a week away from the end of the Mayan calendar.

There are many who think it could mean the end of the world.

There are some who think it means the beginning of a new era.

There are some who think it doesn't mean anything because they believe it to be based on a lunar calendar and the time elapsed about two years ago.

So what do I think?

I find it particularly intriguing because of something that happened nearly 32 years ago. I got to see the actual Mayan calender wheel at the National Museum in Mexico City. When I was there, I specifically remember them talking about the how the calendar "ends in 2012".

I knew that to be a very long time away, after all, I was only 16 years old.  However, for the past 31 years, it has been in the back of my mind.

I remember asking them what it meant.  No one knew. They speculated that it might mean the end of the world.


I've seen the posts on Facebook.  "End of the World" parties at bars; news reports of panic & preparation; cartoons about why they made it end on the winter solstice in 2012.  I've heard people laughing about it, but could hear doubt and/or concern in their voice that they were worried about the future.

I think I would rather address people's perceived needs about the future and their security than to dismiss it with a snarky remark.

In case I'm wrong, here's what you need to know BEFORE the end, whether it is December 21, or whenever the end of the world happens to be for you: Jesus said, "I am the way, the truth, and the life; no one comes to the Father except by me." (John 14:6) He also said, "For God loved the world so much, that He gave his only Son, that whoever believes (or trusts) Him, won't die an eternal death, but have life in the hereafter" (John 3:16 RBV*)

When you get down to it, that's all you really need to know. It is simply a matter of trust. Do you trust God to take care of your eternal soul through Jesus? Either you do or you don't. If you do, you get life. If you don't, you don't.

My advice is to not worry about what the Mayan calendar says or doesn't say. But instead, make sure your plans for eternity are settled.

If you need more information, please don't hesitate to contact me; this is too important to ignore.

Top down in december! 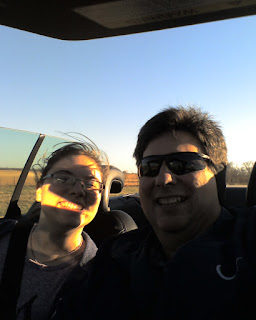 Posted by Rick Boyne at 3:43 PM No comments:

(notice the date and time of posting, too!)
Posted by Rick Boyne at 12:12 AM No comments:

Here is my Sunday morning message, "God Remembers" base on Luke 1:5-25

Posted by Rick Boyne at 2:52 PM No comments: 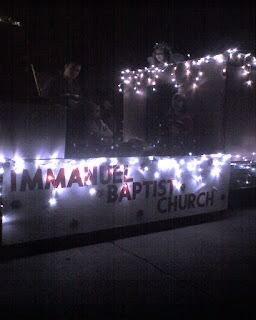 Posted by Rick Boyne at 6:50 PM No comments:

Happy Anniversary to the Love of my Life, Sally!  We've been married 20 years TODAY!

I love you! I thank God for blessing me with you. I don't know what I'd do without you!
Posted by Rick Boyne at 12:01 AM No comments:

Have you noticed that some churches are Immanuel and others are Emmanuel?

Have you noticed that some Bibles say both Immanuel and Emmanuel while others only say Immanuel?

So what's the difference?

They are exactly the same word with the same meaning, "God with us."

But they are spelled differntly. One has an "I" while the other starts with an "E".

Which one is right?

Well, both can be called "right", but, in my opinion, one is more accurate than the other.

So, there you go.

But, in all of this, DO NOT MISS THE POINT:

In the beginning was the Word, and the Word was with God, and the Word was God. He was in the beginning with God. All things were made through him, and without him was not any thing made that was made. In him was life, and the life was the light of men. The light shines in the darkness, and the darkness has not overcome it... And the Word became flesh and dwelt among us, and we have seen his glory, glory as of the only Son from the Father, full of grace and truth.

Jesus IS Immanuel; God with us!
Posted by Rick Boyne at 10:36 AM No comments:

Here is my Sunday morning message, "Immanuel-God with Us" based on Matthew 1:18-25

Posted by Rick Boyne at 2:45 PM No comments: 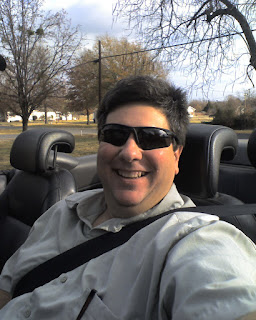 Posted by Rick Boyne at 9:37 AM No comments: 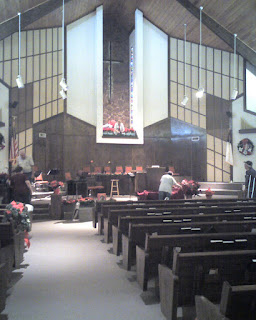