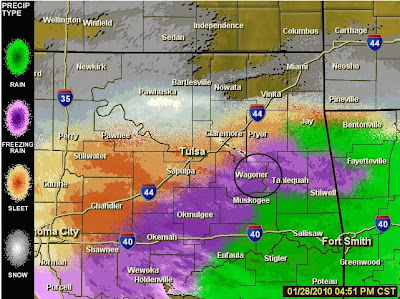 Haiti Death Toll Estimated at "Up to 200K" 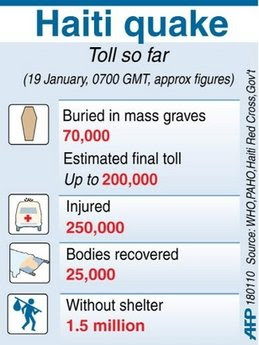 I found this staggering chart this morning.

If you haven't contributed to Haiti Earthquake Relief, have you at least prayed for them and the efforts?
Posted by Rick Boyne at 8:39 AM No comments:

I guess it just goes to show, Universal Health Care (in the current form) is NOT a necessary evil! The liberals in Massachusetts have spoken!
Posted by Rick Boyne at 8:50 PM 2 comments:

Who voted for "CHANGE"?

For all of you who voted for "Change", well, we got it. All most of us have left in our pockets is "change".

Thanks a lot. Our children's children will appreciate paying for all this "change".
Posted by Rick Boyne at 8:42 PM No comments: 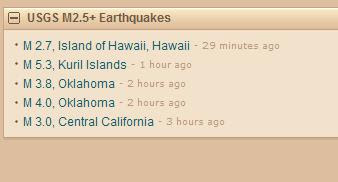 We must be at the end of the world. We've had two pretty good (for Oklahoma) earthquakes this morning. We had another one earlier this week.

Yes, they are very small. No, there was no damage. No, it is not anywhere near the important as the earthquakes in Haiti.

BUT, it is indeed strange to see them in Oklahoma.
Posted by Rick Boyne at 11:35 AM 3 comments:

Good news (for a change)

Pastor Bill Grandi writes over at The Cycleguy's Spin. He wrote a post this week that brought tears of joy to my heart and I wanted to share it with you. Click this link; you'll be glad you did!
Posted by Rick Boyne at 2:48 PM 1 comment:

I heard on the news this morning that there are already scam artists at work in regards to the earthquake in Haiti.

With this in mind, I offer the following legitimate avenues for making cash donations for Haiti Earthquake Relief:

Of course, the White House has set up a text system to donate $10 via your phone bill and you can always give to the Red Cross, but I wanted to highlight these Christian foundations that are working to provide more than just physical assistance.
Posted by Rick Boyne at 2:10 PM No comments:

A First for Me

I just received an entirely inappropriate sms forward from someone whom I do not know. It was sent out from someone named Tabby in the Springfield, MO, area to some of her girlfriends. It was one of those sappy silly forwards that will bring good luck or other some such nonsense if you send it out to 9 other people in the next 9 minutes. What was different about this one was that it had a picture of a naked man attached to it!

I texted the person and asked them who they were and why they had sent me such an inappropriate picture. The simply texted back "I'm Tabby; sorry".

Most likely, it is some teenage girl trying to be cute or popular with her friends. (No, I'm not going to repost the picture here; this is a G-rated blog).

I am concerned, however, that anyone would send anything like this to anyone else. I guess kids can get away with it because it is private and not seen by parents. I know kids know how to delete their in and outboxes, even if their parents regularly check the phones.

We have a standing policy at my house, that as long as I'm paying for the cell phone use, I have the right to read incoming and outgoing sms messages. In fact, when my daughter got a marginally inappropriate text from someone, she brought me her phone to show me. I took care of it by texting the kid from my phone.

In this age of sms and email, we must take extra care to watch out for our kids; the world has them in it's site and wants them for itself.
Posted by Rick Boyne at 11:46 AM 3 comments:

Off to a rough start

I was hoping to be off to a much better start in 2010. In some ways I am, but I am still afflicted by a little thing called a kidney stone.

No, this isn't my first one. Or my second. Or my tenth. Or even my twenty-fifth. The one awaiting its debut is number THIRTY-NINE!

It hit me the Thursday before Christmas, so I have been dealing with this bad boy for almost four weeks now. The longest previous span was ten days, but that was back in 1986.

Quite frankly, this has been the hardest six months of my life, health wise. I still consider myself to be a healthy person; I've just had several things go wrong.

I was also hoping to have been more consistent in blogging. I wanted to average one post a day, but I'm already behind. That is something that shouldn't be too difficult to catch up on. I have some very interesting pictures of some clear sky snow that we had this week. Strangest thing I have ever seen.

Owing to the pain from my little buddy, I've only felt like writing on my book one day this year. I've written about 25% of what I need and have already re-written most of that. I'm hoping to have it done by the end of Spring.

One thing that is off to a very good start is what God is doing at our church. This past Sunday, I had the privilege to baptize four people, three of which were from the same family. Below is a picture montage that Lori Boyd compiled for me. 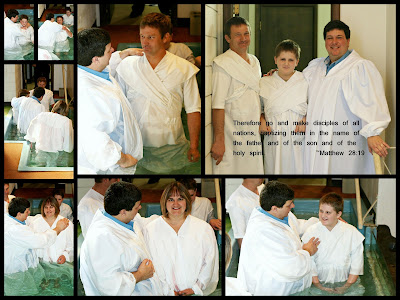 God is doing an amazing work to take our little church off the "inactive" list and use us again! I'm honored and humbled to be the pastor here.
Posted by Rick Boyne at 10:57 AM 2 comments: 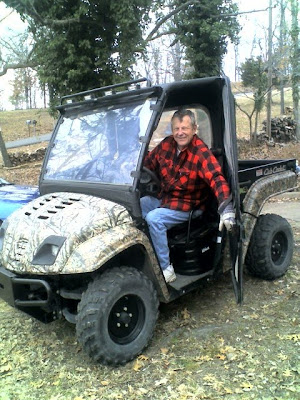 Mom took this picture of Dad on his new Christmas/Birthday 'mule'.
Posted by Rick Boyne at 1:00 PM No comments:

Today is my dad's birthday!

This is him at 3 months old. 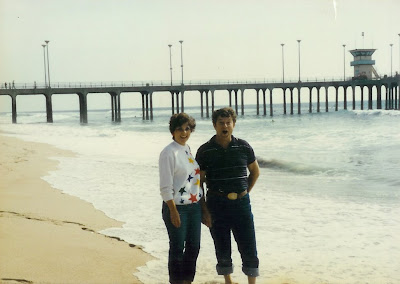 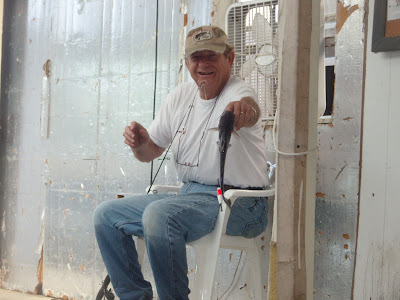 I am constantly amazed at the number of phone calls I get to the church from people trying to sell something and trying to make me feel guilty for not buying it.

Today, I received a call from some marketing outfit in the DFW area. They were selling "spirit t-shirts" for the cheer squad at Wagoner High School. They said we were given the privilege of being the only church offered to be on these quality t-shirts. They said that for the low, low price of only $370, we would have the privilege of supplying 3 dozen t-shirts for the cheerleaders to give away to the student body. In case you are math challenged, that's ten bucks a shirt.

I asked how many companies were being given the privilege of supplying t-shirts to the cheer leaders. She said they had asked for nearly 400 t-shirts. FOUR HUNDRED SHIRTS at ten bucks a pop!

I commented that it seemed like that was a pretty good profit margin for their company and, of course, she told me about all the expenses that went into producing these quality t-shirts. I told her that I thought it didn't sound too good to me and that I thought I would pass. She then asked me if I could recommend another business or church that could fill this order. I was polite, but I told her that I didn't think this was a good deal for any business or church and that I wouldn't recommend any.

She told me to "have a blessed day", but you could tell she didn't really mean it.

When I first started pastoring, it was hard for me to say no.

Polar Express On Its Way! 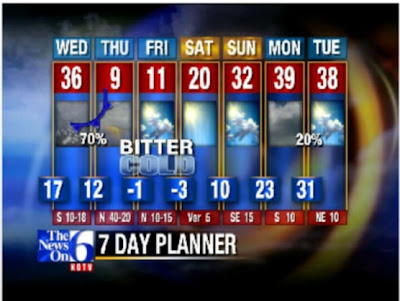 NEOK is in for some REALLY COLD WEATHER in the next couple of days! I drove to Muskogee today and saw that the Arkansas River was frozen over. I remember when it happened way back when I was a kid and Don Woods from KTUL in Tulsa remarked that it hardly ever happens. Travis Meyer from KOTV is already saying that if you don't have to go out on Thursday, DON'T!
Posted by Rick Boyne at 5:01 PM 2 comments: