Twenty-five years ago, at First Baptist Church, Vinita, Ok, Sally and I were united in marriage.

Looking back, it seems we were just kids, although we had waited longer than most of our friends to get married.

It has been a wonderful journey that God has led us on; to serve Him all around the world.

He blessed us with Emily.

He blessed us with being able to see His creation.


And pray for people all over the world.

We have been blessed to live all over the world, too.

And enjoy great family adventures together.

Then, He brought us back to Oklahoma, we He has allowed us to serve Him at "home."


We added John Ellis to the family last year.


Our adventures will continue.

Now, with an empty nest, we will continue to serve the Lord. Continue to fall in love with each other even more every day!

Thank you, Lord, for my wife and family. May you continue to bless us that we might be a blessing to others!

Posted by Rick Boyne at 9:58 AM No comments:

Sally and I had been serving with the International Mission Board in Hong Kong when I felt God's leadership to shift gears in ministry.

I had never pastored a church before. I had only preached less than half a dozen times. My wife later told me that she thought it was going to really be something to watch because, in her opinion, I couldn't preach worth a hill of beans. She has later often told me that God uses me to preach His word in a wonderful way.

Pastoring a church isn't for sissies. There is such a high Scriptural standard that I am held to, by the Lord, and by those I pastor. I will readily admit, I often don't live up to that standard.

In my previous 40 some years experience as a church member, I never knew that the pastor faced so many obstacles and difficulties. There are some nasty people who call themselves Christians. I have been lied to, lied about, gossiped about, slandered, cussed, and called names with words that don't belong in the Family of God.

There are, however, some true saints in the Bride of Christ. There are those who, if a mosquito bit them, it'd fly off singing, "There's Power in the Blood!" These are humble, hard-working servants of God who would do anything for anyone out of love, but avoid the limelight like the plague.

I've seen people come and go. Some situations were so bizarre that I still don't understand what happened. For instance, several years ago, I baptized an entire family, like mom, dad, and 3 or 4 kids. The very next day, they moved to Arkansas!  Some came as flashes in the pan. They caused a big stir, but had no staying power and ultimately caused more trouble than whatever good they initially had.

I've seen God work wonders in people's lives, like the time He raised a woman from the dead on Easter morning (LINK) or when someone got saved at a business meeting, or watching lives being completely transformed. I've seen a whole lot of new/weak Christians grow in the Lord and I've watched some train wrecks as they walk in the flesh. Some are so embarrassed that they refuse to attend church or even take my calls.

I do know this: if everyone who has told me that they would be in service, rain or shine, would all show up at once, we'd have to build a balcony and have three services!

I have performed the duties and ceremonies expected of pastors. I have baptized new believers. I have married couples. I have performed funerals. To be honest, I'd much rather perform a funeral than a wedding!  There is much less drama. But I LOVE to baptize people. I've baptized over 200 people in the past 10 years. (Where are they now? Inquiring minds would like to know.)

It seems that in the last 10 years, I have a lifetime of experiences. I have been blessed to be the front man for VBS for the past 8 years, usually dressing up in a character that goes along with the VBS theme; I have preached in Ukraine, China, and Israel; I've been to children's camp (KBA) and youth camp (Falls Creek); I've driven the senior adults on fall foliage tours; I've gotten my class B CDL to drive the new church bus; and so many other things that escape my memory.

God has done a great many wonderful things in our church in the past 10 years. We have a growing and thriving children's and youth ministries, we have a Food Pantry Ministry that distributes food to the hungry to the tune of about 750,000 meals in the past 8 years, and we have a unique jail ministry that we call "The Cookie Ministry" where we take bags of cookies with a gospel tract to the local jail each month. We are currently debt free and are looking to build a new multi-purpose building with designated funds that we've been sitting on for the past 25 years.


We also have a long way to go. Our financial situation is precarious. Yet, we've never not met our obligations. God has always been faithful with that. I would love to see the expansion of our youth ministry to include a separate class for middle school students. I want to see our YokeFellow and FAITH Rider groups to re-activate. I want a group of folks to step up and help with our children's Sunday School classes. We must have a nursery staff.

I love being a pastor. I LOVE preaching God's word. I love the wonderful folks at Immanuel Southern Baptist Church.

No matter what God has in store for me and for ISBC, we can only pray it is for His glory! For in the end, that's all that really matters!
Posted by Rick Boyne at 12:26 PM No comments: 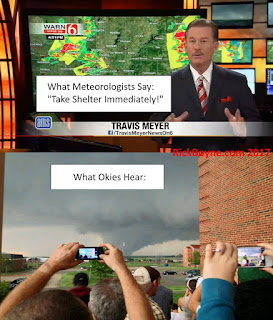 A little meme I made today that explains the psyche of Okies!
Posted by Rick Boyne at 1:22 PM No comments:

Remember what it was like to be able to express an opinion without being lambasted for it? Me neither.
Well. I'm a conservative. I am pro-life. I support traditional marriage, only. I am pro-2nd Amendment. I believe in God and trust in Jesus. I think we need to build a southern-border wall. I think we need to be very very careful with any refugees we allow into our country. I am cautiously optimistic about Trump. I don't like cauliflower. I tired of the hypocrisy of Hollywood. AND the Democrats. And the Republicans. I cannot stand to be around cigarette smoke. I do not like Halloween. I do not like the commercialization/secularization of Christmas. I believe the Bible is the inspired inerrant Word of the Living God. I could live without professional sports of any kind. I love my wife. I think Islam is an ideology more than a religion. I am a Sooner. I think our time on earth is drawing to a close.
There ya go. That's not all of who I am. That is only a few OPINIONS. Don't like it? Tough. De-friend me or block me or whatever. Or, you could just be tolerant of me, like I'm supposed to be of you. I'm tired of playing games.
Posted by Rick Boyne at 1:43 PM No comments: