Well, our time in Koolpuntville 7 is quickly drawing to an end, as we pack up 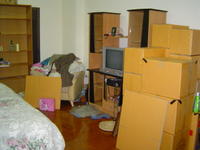 and get ready to move to our new house. The movers are coming Thursday morning at 8:00 to load up the junk and haul it a mile away. Our contractor says everything will be ready in the new house by late this afternoon. We'll see if we get to spend tomorrow night in a hotel or not!
Posted by Rick Boyne at 9:39 PM No comments: 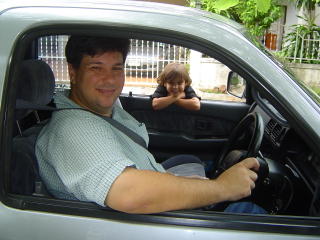 This is me and Emily in my right-hand drive Toyota Tiger 4X4 pickem up truck.
Posted by Rick Boyne at 2:08 AM No comments:

Moving day is Thursday, June 20. Pray it doesn't rain that day!
Posted by Rick Boyne at 1:49 AM No comments:

The following story appeared in The Guardian. Please see my story below about my blog not even being available in China.

Microsoft Helps China to Censor Bloggers (June 15, 2005, The Gaurdian)
Civil liberties groups have condemned an arrangement between Microsoft and Chinese authorities to censor the internet. The American company is helping censors remove "freedom" and "democracy" from the net in China with a software package that prevents bloggers from using these and other politically sensitive words on their websites. The restrictions, which also include an automated denial of "human rights", are built into MSN Spaces, a blog service launched in China last month by Shanghai MSN Network Communications Technology, a venture in which Microsoft holds a 50% stake. Users who try to include such terms in subject lines are warned: "This topic contains forbidden words. Please delete them." Even the most basic political discussion is difficult because "communism", "socialism", and "capitalism" are blocked in this way, although these words can be used in the body of the main text. Many taboo words are predictable, such as "Taiwanese independence", "Tibet", "Dalai Lama", "Falun Gong", "terrorism" and "massacre". But there are also quirks that reflect the embryonic nature of net censorship and the propaganda ministry's perceived threats. The word "demonstration" is taboo, but "protest" is all right; "democracy" is forbidden, but "anarchy" and "revolution" are acceptable. On MSN Space, Chinese bloggers cannot use the name of their own president, but can comment on Tony Blair. "Tiananmen" cannot be mentioned. A Microsoft spokesman said the restrictions were the price the company had to pay to spread the positive benefits of blogs and online messaging.
Posted by Rick Boyne at 11:14 PM 1 comment: 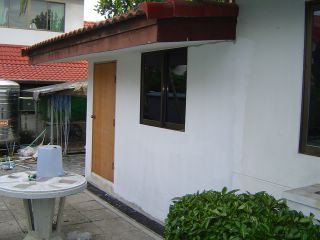 There is still a lot of work to be done, however, before we move in on June 30.
Posted by Rick Boyne at 9:53 PM No comments:

I have decided to try on a different name for my blog for a while. While "Goofblog" was a fun and creative name, I think that "BoyneBlog" better suites me.

Please take a moment and tell me what you think about the new name.
Posted by Rick Boyne at 2:34 AM 2 comments:

Now, that's what I call "Progress!" 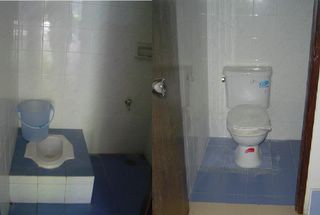 Moving from a "squatty potty" to a western toilet just makes me want to sing the theme song from "The Jeffersons" (Movin' on up!)
Posted by Rick Boyne at 3:13 AM No comments: 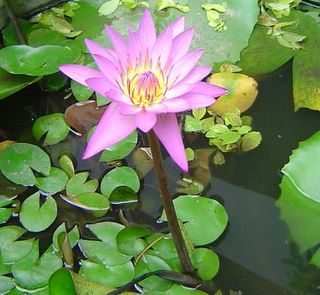 A water lily in our new yard.
Posted by Rick Boyne at 9:46 PM No comments: 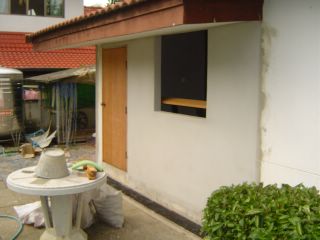 Work coming along fine
Posted by Rick Boyne at 12:18 AM No comments:

According to NASA, the bug below is an Asian Long-Horned Beetle and has the potential to be very dangerous to hardwoods in North America.
Posted by Rick Boyne at 10:33 AM No comments: 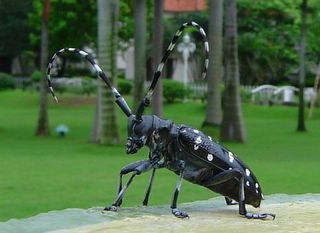 Anybody know what kind of scary bug this is?
Posted by Rick Boyne at 3:34 AM No comments:

A Break in the Rain

A short break in the rain came this morning and I took the opportunity to take a few pictures around the resort. The one just above is of the girls near the lake. The one above that is of what I like to call, the "Alien Beetle". Kinda scary looking!
Posted by Rick Boyne at 2:54 AM No comments:

Girls by the Lake 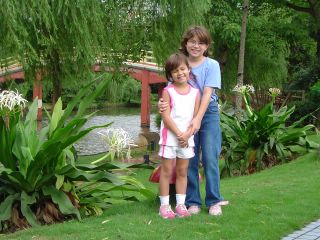 In the Zhuhai Resort garden.
Posted by Rick Boyne at 2:54 AM No comments:

"Goofblog" Not Available in China

To protect the Chinese people, the People's Republic of China has chosen to block most blogs from the internet in China, including "Goofball's Goofblog". I have heard that less than 50% of the internet is availabe to the Chinese public. How sad.

I would like to say more, but I am still "in country."
Posted by Rick Boyne at 2:23 AM No comments: 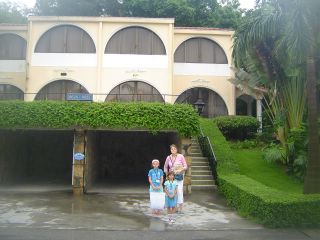 Our "villa" in Zhuhai, China
Posted by Rick Boyne at 8:21 AM No comments:

Are they out of their minds?

American style justice, a la OJ Simpson. What in the world is going on here?
Posted by Rick Boyne at 3:52 AM No comments:

Well, today we travelled to Zhuhai, China. What a trip it was. We got up at at about 4:45 am and were at the airport in Chiang Mai by 6. We landed in Bangkok around 8 and had a fair breakfast at the Thai Airways Restaurant in the International Transit area. It wasn't great, but it was edible. Our plane was supposed to leave by 10:30, but there was some little problem somewhere and it made us about 20 minutes late. Well, of ourse, this had an adverse effect on our connection in Hong Kong. We were supposed to catch a ferry to Macau at 3 pm, but because the plane was just a bit late, they weren't able to get our luggage on the ferry. So, two of the group (without kids) volunteered to stay in HK and catch the 6 pm ferry. We just made it on the 3 pm ferry and arrived in Macau around 3:45 or 4. The immigration line was HUGE, so it took us a while to get through. At least the man that was supposed to meet us was actually there, so that part went smooth. We boarded a bus that took us to the other side of the colony to the exit station, where we stood in line at immigration to get OUT of the country for 10-15 minutes. Then, we walked across an open area, into the immigration INTO China. That took quite a while, too. A first (bad thing) did occur when we tried to get through the immigration officer. Normally, in all our years of travelling as a family, we go to the immigration officer together. This woman with a "tude" actually raised her voice at me and told me it was only "one at a time". I told her that we were not a "group" but a family. She said it didn't matter that everyone else was to get behind the yellow line. So, I stood at the little window and called my kids up one by one to go through immigration. Then, I called my wife. Of course, the whole time I was there, I never moved from my spot. In essence, it wasn't one by one, but one with one. Anyway, I have never experienced such a bad attitude from any immigration officer and really put a bad taste in my mouth for Zhuhai.

We arrived at the hotel, the Zhuhai Holiday Resort, which is a China 5 star hotel. (As I explained to one of the kids, a China 5 star is VERY different from a REAL 5 star.) The hotel is very nice. We are actually in a separate villa. It has two stories with a living room, dining room, kitchen, three bedrooms and 2 1/2 baths. The room rate is about the same as a Motel 6. Quite a bargain. At about 7 pm, I left with one of the guys to go back to immigration to assist the volunteer who brought the luggage across from Hong Kong. While I was there, my family went on to a restaurant to get something to eat. They were kind enough to bring back the leftovers. Tandori chicken, butter chicken, pineapple fried rice, Indian salad, and watermellon. It was a very tasty leftover dinner.

We will be here all week long with some other friends from across Asia. Hopefully, it will be a good time for all of us.
Posted by Rick Boyne at 8:43 AM No comments:

Email ThisBlogThis!Share to TwitterShare to FacebookShare to Pinterest
Subject Matter Travels in Asia

Yesterday, we took a little trip to Hang Dong, about 6 miles south of Chiang Mai, to look for some furniture. We found a teak dining room table and 6 chairs for about $700. That is a little bit more than we want to spend. However, they were absolutely beautiful!

Tomorrow, we are headed to China, via Hong Kong. We will be gone for about a week and return late next Saturday. It should be a fun time with the whole family.
Posted by Rick Boyne at 2:57 AM No comments: 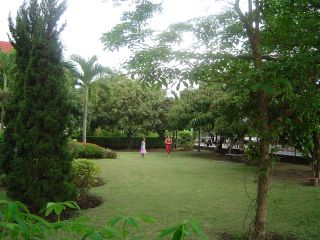 Our new house has a nice big yard.
Posted by Rick Boyne at 12:44 AM No comments: 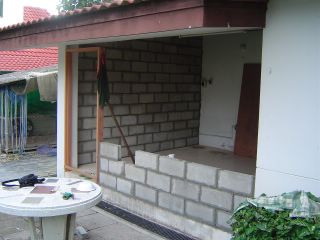 Work is progressing on the new room in our new house.
Posted by Rick Boyne at 12:44 AM No comments: 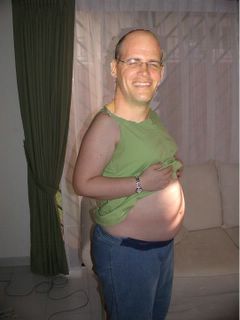 I hope their kids aren't this ugly!
Posted by Rick Boyne at 3:22 AM No comments:

I now have a fourth grader and a first grader. The kids finished school today. As I sat in the (very) long awards assembly, I thought back to when I had to sit on the gym floor (hopefully) awaiting my name to be called so I could get up in front of the school and be honored for what all of us should have been doing anyway. 32 years ago I finished 3rd grade. I loved 3rd grade. (actually, I think I was in love with Miss Stiles, my teacher) Thirty-two years ago. My goodness!

I am proud of my two girls for doing well in school and being promoted to the next grade.
Posted by Rick Boyne at 4:46 AM No comments:

Last night, about 10 pm, I was headed out to the grocery store to buy some icing for cupcakes for my kids' class parties today. Anyway, as I was leaving the house, I noticed something in the yard. I took a closer look and it was a little bat. It had a body about the size of a regular house mouse and had about an 8-10 inch wing span. It appeared to be wounded, or at leasted stunned, because it couldn't fly away. I picked it up with a little fish net thing and took a closer look at it. I could tell that its heart was beating awfully fast, so I put it back down on the grass again. It kind of scooted away, but didn't fly away. This morning, it was gone.

It was interesting to get that close to "wild" nature. Obviously, I have seen bats before, but I have never been that close to a live one. I was amazed at how much it looked like a mouse with wings.
Posted by Rick Boyne at 10:22 PM No comments: 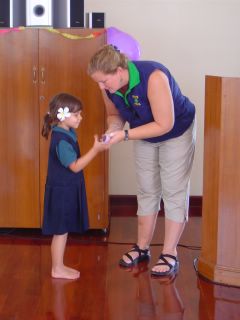 Today, Emily graduated from Kindergarten! We had a big party at the Consulate Residential compound, which was very nice. They sang songs, recited memory verses, then they received their diplomas. We ended up having a nice pot-luck lunch then a swim in the pool.
Congratulations, Emily!
Posted by Rick Boyne at 2:48 AM No comments: