I heard the sirens before I saw the truck. Emily and I watched the fire truck and the fire Suburban race by in front of our house. We heard them slowing, so we went out on the front porch to take a look. That's when we smelled the smoke. The sickening smoke of something other than leaves, wood, or trash. The smell of a house on fire. We looked up and saw brown and black smoke rising from a couple of blocks away.

Curiosity got the best of us and we drove over there, arriving just as the firemen were hooking up their hoses. Large orange flames were literally shooting out of the front door. Thick smoke was pouring out of the windows and around the place where the roof/ceiling connects to the walls. The firemen had the fire out in about 10 minutes, but within that amount of time, another family lost everything they own.

The city meter reader was standing next to me telling me that the woman's (who lived in the burning house) parents' house burned to the ground last month or so. That woman arrived a few minutes before her daughter. They were both distraught. I was so sad for them.

Unfortunately, I realized that I had to go pick up my other daughter from school, as Sally went to visit her mother this morning, because she had to go to another town for an eye appointment. I had to leave just when the two women broke down (understandably) into tears.

I picked up Audrey and told the girls that I needed to go back to see if there was anything I/our church could do. By the time we got back, the police had corded off the area and I couldn't get to the women.

I realized how quickly your entire life can change. It made me more content, more appreciative of what I have. I pray God's grace upon that family and their situation. Hopefully, this evening or tomorrow, I can make contact with them and help them in their hour of need. You take a moment and pray for them, too.
Posted by Rick Boyne at 3:56 PM 2 comments:

I am starting to hear murmurs and rumors of cooler weather headed this way. I kept hearing this on TV, but then I looked at the extended forcast, and it is still supposed to have highs in the 90's. OK, so it isn't 100, but yikes! How about some highs in the lower 80's?
Posted by Rick Boyne at 11:51 PM 1 comment: 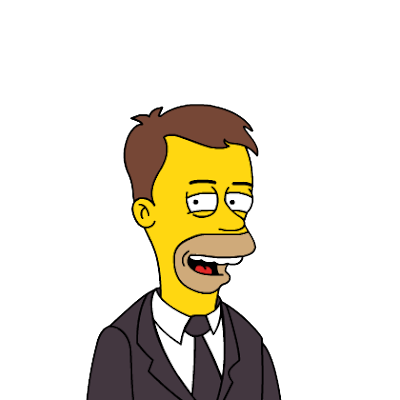 I went to http://www.simpsonizeme.com/ and this is what I came up with. Yikes!
Posted by Rick Boyne at 6:14 PM No comments:

Can you see ths image?

Click on the above image to make it large, then see if you can decipher the 3-D image. Leave your guess in the comment section. I made this image myself.

(I can tell what it is with just a little bit of effort)
Posted by Rick Boyne at 6:01 PM 6 comments:

Well, it changed from whagt it was 20 years ago, but it shows me as an ENFP.

You can take the test yourself here.

Here are some folks who are also ENFP.

"I'm proud to be an Okie from Muskogee,
A place where even squares can have a ball
We still wave Old Glory down at the courthouse,
And white lightnin's still the biggest thrill of all"
- Merle Haggard, 1969
(Just in case you had ever wondered if it was true; well, it is.)
Posted by Rick Boyne at 10:45 PM 2 comments:

Remnants of Tropical Storm Erin brought much needed rain and much cooler temperatures to Oklahoma this weekend. Wagoner was spared the brunt of the storm, but a town just 50 miles away got 10 inches of rain in 4 hours! CNN and the networks have been running video of helicopter rescues from housetops, flooded cars, and flooded fields. It was very interesting, to say the least, to have tropical storm dump rain this far north.

Here in Wagoner, we got about 3 inches or so and the temps didn't reach 90 yesterday. There was a brief time when the neighboring county, Muskogee, had a tornado warning, but we held out pretty good here in Wagoner County.
Posted by Rick Boyne at 9:11 AM No comments:

Yes siree, a big Friday night for the Boyne family! Here we are all sitting together watching "High School Musical 2". We ordered pizza and are all sitting around enjoying the show. (That's why I'm posting a blog entry right now). The kids have waited all summer for this and they are so excited they can hardly sit still. I am having more fun watching them watch the movie, than actually watching it myself.
Posted by Rick Boyne at 8:23 PM 2 comments:

ONE HUNDRED AND FOUR DEGREES!!!!!
This is getting plum silly!
Posted by Rick Boyne at 4:18 PM 1 comment: 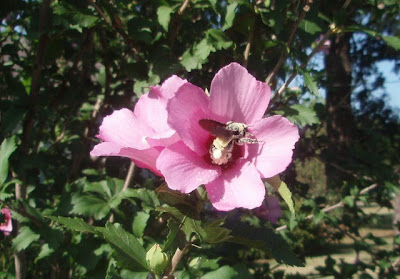 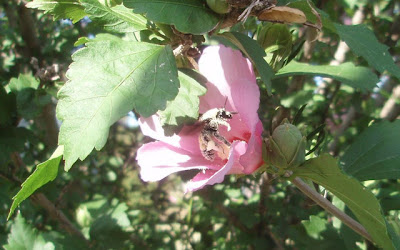 As I was walking back from the house to the church this morning, I noticed that bees were enjoying our huge Rose of Sharon bush. Since I happened to have my camera with me, I took several pics. These two are the best of the lot.
Posted by Rick Boyne at 10:20 PM 2 comments: 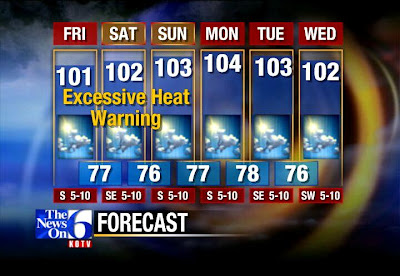 Don't touch that car door handle if it has been out in the sun!
Posted by Rick Boyne at 10:55 AM 1 comment:

Well, I was tagged twice as "Nomad" by Debbie and Kevin, and now once as me. This time it was by a blog friend of mine, Matt Harmless. I have been acquainted with Matt for a couple of years now and would really like the opportunity to meet him in person sometime. You can read all about Matt at his blog, Harmless Thoughts.

I'm not very good at tagging, but here it goes: I tag
Matt Blogadocious
Becky The Storment Girl
Randy The Global Texan
Alan Hong Kong Happenings, and
Jim and Kim The Day Timers.
Posted by Rick Boyne at 11:19 PM 2 comments: 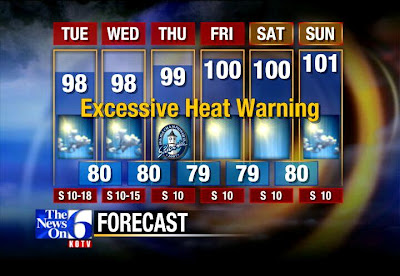 Well, it looks like summer has arrived. We have not yet hit 100 degrees this year, so I guess we can't really complain much. However, Travis Meyer is saying that starting Friday, we'll have 7 days of 100 or better temperatures. Yikes! That is not fun. Of course, it has been a lot hotter than 100-101, however, with the humidity and lack of wind, the heat indices will be near 110-115.
I found interesting that they called for an "Excessive Heat Warning" for the upper NE corner of OK. Unfortunately, it includes Wagoner and Wagoner County.
Posted by Rick Boyne at 11:14 PM 1 comment:

Wagoner is a GRDA Community

I found out today that Wagoner is a Grand River Dam Authority community. Sally used to work at GRDA before we went overseas, and now, we have to pay them!

All these years we have laughed about GRDA because it sounds like a very bad stomache disease you can get called giardia. The disease is no laughing matter. I had it many times when we lived in Africa. It hurts!

I went down to the Wagoner Public Works Authority to sign up to get our name on the electricity, water, sewer, and trash bills. An amazing thing, after all these years. Overseas, our accounts were usually in the mission's name and we simply paid them for the bills. I met a real nice lady, Mary Ellen, who seemed to be having a rough day. She said that normally there were two people in her office, but the other girl was on vacation. She was very nice and I tried to get her to laugh and smile. I invited her to come to church, too, but she said she attends regularly at another church. As I was leaving, she thanked me for the invitation to church.

Any, here we are back in the US and we have to deal with Giardia, I mean GRDA again!
Posted by Rick Boyne at 10:49 PM No comments:

First Sunday in the Pulpit

Today was my first Sunday in the pulpit at Immanuel. It was a great day. The DOM for Muskogee Association dropped by to pray with/for me. My best friend in the whole world, Martin Whipple and his family, and his parents came to hear me. My college friend Pam Kluver and her two sons came to hear me. My parents-in-law came to hear me. (my family would have come, except for Uncle Bill's passing.)

Folks seemed to be interested in the messages for both services. No one (that I could tell) fell asleep during the services and I didn't see anyone looking at their watches.

I really felt like I did a mediocre job, but everyone kept telling me that I did a great job, so the only explanation was: it was from the Lord. 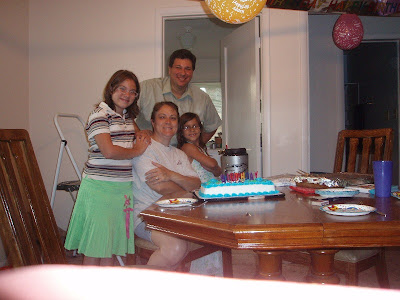 Today is Sally's birthday. Our church acknowledges birthdays by bringing the person to the front and singing to them. Audrey sang a special song during the service. (Unfortunately, the camera battery went out and we lost the video of her song.) Sally's folks came to Wagoner to help us celebrate, then we all went out to Red Lobster for lunch.

Happy Birthday, Sally! I love you.
Posted by Rick Boyne at 8:36 PM 4 comments: 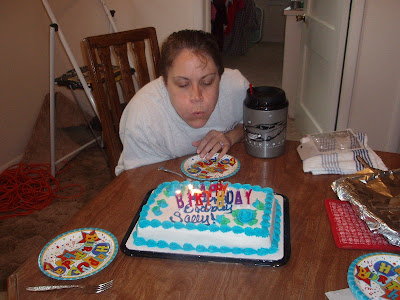 Blowing out the candles.
Posted by Rick Boyne at 8:32 PM No comments: 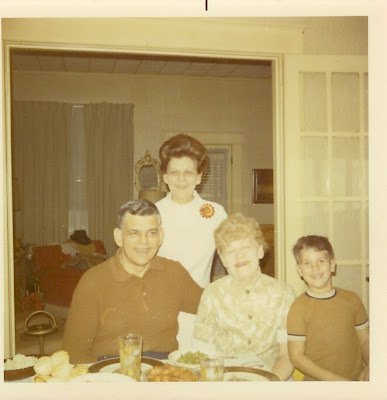 Today, my favorite uncle is spending his first day in Heaven. He is no longer in pain and he can breathe without struggling. He is visiting with his mother (Mom-mom above), his father, his wife, and a host of friends and family who have gone on before him. What I am happiest about, however, for him, is that he is now in the presence of Jesus. He has seen Him face to face. He knows things for sure that we can only speculate about. I wonder if he has met Abraham or Paul yet. I now consider him part of my own personal "great cloud of witnesses" that I have.

I will miss him, but I am simply being selfish. I know for sure that he would never even consider returning to walk among us, when he can walk among the saints of God.

Pray for his family who will grieve their loss.
Posted by Rick Boyne at 9:58 PM 3 comments: 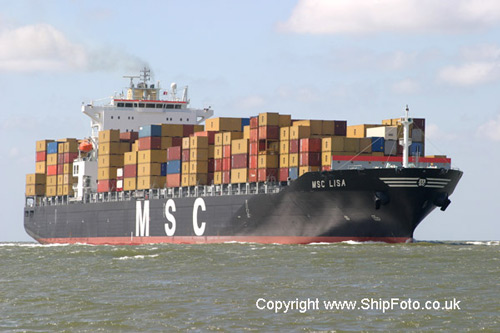 Well, our stuff is loaded up on a boat again, crossing the ocean again. Some of our stuff has traveled more than we have. It left Houston in 1998 eastward to West Africa. Then in 2002, it left Abidjan for Chiang Mai, Thailand. Now, it loaded up out of Hong Kong and is headed back to Houston. It should arrive near the end of August. Some of this stuff has gone all the way around the world! Now, it is going to be coming back through the Panama Canal. I've never done that, but my stuff will have! Egads!
Posted by Rick Boyne at 11:58 PM 3 comments:

OU is rated 11th in the AP and USA Today pre-season polls. We are 10th on the BCS poll and 8th on the Harris Interactive.

Today was my first day as pastor of Immanuel Baptist Church in Wagoner, OK. I spent most of the day just simply setting up my office.

I had a really good Wednesday night service with the church tonight. You can read about it on the church's blog.

I am excited to see the response from the congregation during and after the service. I know everyone is excited to have a new pastor and that is part of it, but there seemed to be something else as well. I am really looking forward to seeing what God has for us all.
Posted by Rick Boyne at 10:27 PM 2 comments: