What do you do when, at the last minute, your church decides to put a float in the Christmas parade?

Well, the best you can, of course! 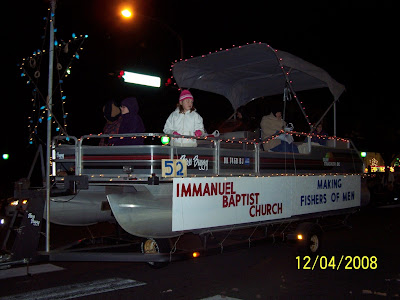 The theme of the Christmas parade was "The Greatest Show on Earth: The Birth of Jesus Christ". Well, we didn't have enough time or manpower to play to the theme, so we thought of the next best thing: use a boat as the actual float! 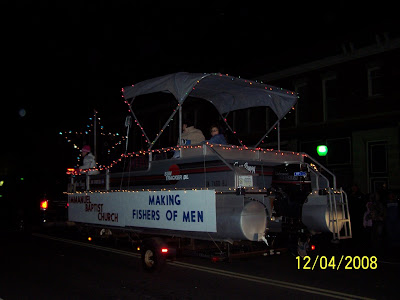 We put lights around everywhere, made some signs, and voila! instant float!

We had a LOT of positive comments from the redneck contingent!

When my family simply watched the parade last year, we noticed that it was pretty well a quiet parade except for the bands. This year, everyone on the boat-float shouted out "Merry Christmas!" The response was overwhelming! People waved and shouted back, "Merry Christmas to you, too!" It was really fun!

Next year, we'll get an earlier start and about 25 more pounds of candy to throw. By the way, we noticed that the kids were not picking up the Tootsie Rolls! What's up with that?
Posted by Rick Boyne at 8:08 AM

We also included music on our float, whether taped, or children, or even preschoolers...we tried to get as many as involved as possible!

Love the float. Wendy loves the decorations on the house as well. We are praying for you.

Martin, Thanks for your prayers! You are being prayed for as well. Keep me in the loop with what is going on in your life!

I think it is awesome!!! You did great!! I love you and am proud of you Rick!

I love you!
Pam

Thanks, Pam! Love you, too!

Hey, your float does. Did I say that right?

We had artificial snow here (Ft Lauderdale) and the kids went crazy playing in it.

The float looks great, Rick. : )
It has been a family tradition for our five to go to the Tulsa Parade of Lights. (Last year was the FIRST we've missed and that was due to a volleyball tourney.) Eastood used to always have a float, often times using the children in a nativity scene and kids singing. A few years back there was a flatbed truck with a bunch of white haired folks on it. I was laughing, but then SHOCKED when I realized that at THAT moment, they were only twenty years older than I was! (I was a graduating class!) LOL! I don't laugh about that one much anymore. Glad you enjoyed the experience.