From the "Uhhhh" Category... 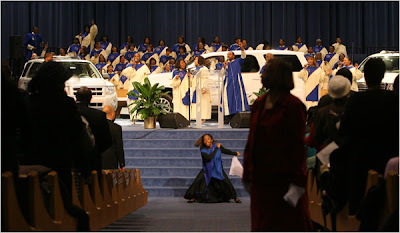 PRAYING FOR A MIRACLE S.U.V.’s sat on the altar of Greater Grace Temple, a Pentecostal church in Detroit, as congregants prayed to save the auto industry.
Detroit Churches Pray for "God's Bailout": Read the NY Times story here.

OK, let me be the first to say that we need to take everything to God in prayer. But...

I know that if the car makers close, it will mean economic devastation to Detroit, but the car makers and unions have been so greedy for so long that maybe, just maybe, they need some big time reorganization, instead of divine intervention.

Perhaps I'm being too hard nosed about this, but Chrysler has already had one bailout; why should we do it again? GM is way too diversified and Ford is top-heavy. I hate to see Ford go out of business; we are Ford people from way back.

But, do you think we need to bring SUV's on stage in a church to pray for them? I don't.

Hi, Babe,
I see you found a picture of the news report I saw. Pretty strange. I think this is a case of praying for personal gain rather than God's will.

How 'bout the unions taking a reasonable amount of money and not paying the janitor as much as the folks on the line....

Also, let's quit paying people to get rid of them. Just fire them if they are doing a bad job. If they aren't doing their job, they are the ones breaking the contract, not the company.

My hubby is a union worker and well, we share your sentiments. There are MANY "workers" who need to GO HOME TO SLEEP.

It's FRUSTRATING. PLUS, when 9/11 happened and his industry was hit so hard, they gave him a much needed raise but then took it away shortly thereafter. Just nullified the contract. We're forever grateful to keep a job. HOWEVER, they took a LOT in effort to keep it afloat. It hurt the workers. Losing an major airline would also hurt bigtime. No one bailing us out! : )

I don't have a problem with the church putting the vehicles on stage and praying. God knows the intentions of the heart. All that matters!

We've been having several prayer discussions here with our youngest. Yesterday, for example, without my knowing until TODAY, she prayed for three things. She prayed for good grades on a test she'd worked hard to study, a part in the play she'd tried out for, and that her OM coach would listen to her ideas. These things were HUGE to her and at the end of the day, she believes it is a direct result of her prayers, not her abilities, that each result was favorable. Wish we were more childlike in our faith!

It would have been okay if they weren't SUV and had been gas-efficient cars.

I'm jealous...I never pastored a church that could hold that many SUVs on stage...or even one SUV...or VW Beetle...I wonder, did they move the altar table out of the way to drive them up? Or, did a helicopter lower them through the roof...oh sorry, that was Jesus healing a sick man lowered through the roof.