I've got some questions for the press

Does the American press hate President G.W. Bush so much that they look upon the incident in Iraq with amusement? Do they not realize that the Office of President is still sacred to the American people? Do they simply laugh along with the antics of a disrespectful journalist? 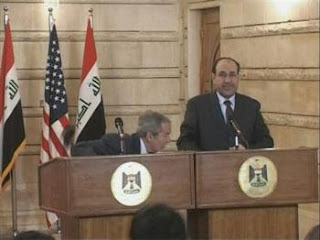 As Muntadar al-Zeiti threw both his shoes at the American President, he shouted in Arabic, "This is a farewell kiss, you dog, this is from the widows, the orphans and those who were killed in Iraq."

I understand emotionalism. I can't pretend to understand where this reporter is coming from. I know he is hurting. I know he hates America. I hate the fact that so many innocent people have died. Did this reporter not realize that because Saddam is dead that he can even do something like this and live?

But, when I watched reports of this on TV last night and this morning, I did not see any kind of criticism for this action from American broadcasters. There were people explaining about the significance of this action in Arabic culture. In the words of Jay Leno, "Well, duh! It's an insult in America, too, when someone hurls a shoe at your head"

I realize that the President has a very low approval rating. You can dislike the president, but still respect the Office. And quite frankly, I have seen very little respect for the Office.

I want to see something like my own feelings on the matter:

It's not really the job of the mainstream press to provide editorial comment about the shoe throwing incident. They should just report on the incident which is what they did.

I'm sure you could have gotten some of that on Fox News though.

Also your idea that the journalist was free to throw his shoe now is wrong. He is subject to 2 years in prison for it from what I heard.

I never said he was "free" to do this without consequence; I said that he could do it and LIVE. That's quite a difference! ;-)

Mainstream news provides editorial comment on everything else. I see this as something where either they hate Bush so much they won't comment or they are afraid to offend Arabs.

I agree with the point that it is an offense not just to Bush, but to the Office and the United States.

In the office the other day, there was some discussion about people protesting or making statements about Tibetan freedom. The foreigner who was advocating it, said it was people's right to voice their opinions and protest. I wasn't in the conversation, so I kept my mouth shut, but I wanted to say, "you gave up that right when you left Canada and moved to Hong Kong."

One thing that was reinforced this past week from Bible study is that freedom and responsibility are intertwined. You can't have freedom without responsibility. Furthermore, people mistake freedoms for rights, which are really two different things.

You are exactly right and I agree.

I heard Pres. Bush himself crack a joke about this, but otherwise, just comedians, who poke fun at everyone, and everything (practically). I haven't seen or heard much amusement, who in the press is laughing? (I really don't know)

I am pretty sure this was a more personal attack on Mr. Bush than a generalized attack on America. The reporter is said to have been traumatized by US bombing of Sadr City this spring, and blames Mr. Bush for it. Now there are incidents of shoes being worn on belts and being thrown at our troops. He is turning into some sort of folk hero in Iraq.

If he had been an American citizen, he probably would never see the light of day again. Remember "Squeaky" Fromme? She is still in prison for going after Pres. Ford sometime in the Seventies.

I don't think he was expecting to live because he passed a note that said something like: "It is good to die a martyr."

In any case, he is subject to punishment. Now they are saying it is 7 to 15 years.

Even by American standards that seems a little hard for a shoe throw. Disrespect isn't that painful even if it was at a president at his low point who didn't need anymore piling on.

I don't think it is a case of the media hating Bush. Just news reporting. I personally don't think they need to do any editoralizing about it. You can get that from other places.

People like yourself who are outraged will be outraged and others will not.

It would be ridiculous for Charlie Gibson or Katie Couric to say: "This is an outrage and an affront to the American people and our President!!!"

That's what FOX News is for. So people can have their news they way they want it.

If you do like editoralizing with your news then you shouldn't object to the Iraqi journalist because he was definitely doing some editoralizing!! He just didn't take the side you wanted but his audience was all for it.

You can't blame him for doing what he thought was patriotic when you want our news to do what you think is patriotic.

I saw the "cowboy" in our president during this incident. He stood tall and didn't show real fear.