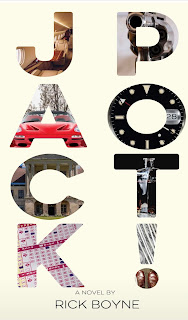 Front Cover
I am anticipating the publishing of my first novel, "Jackpot!" any day now! It has been a long time coming and I am very excited about it, to say the least.  This is the blurb on the back cover:

After winning millions in the Lottery, Owen Rigsby embarks on a reckless journey of self-destructive indulgence, trying to live up to his imagination of a millionaire lifestyle only to find himself alone, empty and morally bankrupt.

A lifelong hatred of the drunk driver who killed his father stands in the way of finding peace with himself and God. Owen learns of the killer's upcoming parole and feels compelled to avenge his father's death. But when the opportunity arrives, Owen discovers forgiveness is a far greater treasure than money and all it can buy.

If you would like an autographed copy, please contact me at rick@rickboyne.com. The list price is $21.95 (set by the publisher, not me) plus $3.49 for postage. (Total is $25.44) This offer is good in the USA only. I accept PayPal, Venmo, and CashApp. Please include your mailing address in the email and to whom the autograph should be addressed.

Posted by Rick Boyne at 2:02 PM No comments:

A year has passed since so-called insurrection at the nation's capitol.  I say "so-called" because none of the "insurrectionists" had weapons. If it were a real insurrection, there would have been much much more bloodshed, instead of just one woman protestor.

This whole thing stinks to high heaven. There is video of the Capitol Police opening doors and letting the protestors in with the caveat, "Don't break anything." Those who have been arrested have not been charged with insurrection, only with trespassing misdemeanors.

There are reports that T ordered the national guard and the DC police chief agreed but was overruled by the DC mayor and by NP. NP, as SOTH, oversees the Capitol Police and her responses are at best confusing, and at worst, traitor-like.

It is obvious to many, if not most, that the media guided this red flag event. Even today, my local station, was reporting on the "Deadly Insurrection" as if protestors had killed police or politicians.  People need to realize that if the majority of those there were actually T supporters, they were then 2A supporters as well, and they did not show up armed. Can we all agree that real insurrection would be truly bloody?

Something is rotten in DC. Always has been; always will.

God help us all.