I have several colleagues who are leaving tomorrow for Aceh, Sumatra. They will be arriving sometime Sunday. They have to bring their own food and water. They will be associated with some relief work.

Posted by Rick Boyne at 4:10 AM No comments:

The Oklahoma Geological Survey indicates that the Earthquake in Sumatra could have actually had effects in Oklahoma. See this article on KTUL-TV in Tulsa.

A first for me

Yesterday, I sent out a newsletter to let everyone know that we are OK here in Thailand. Several wrote and said that my website exceeded the allotted bandwidth and to try back later. That hasn't happened before!

As of this morning, they are estimating the Tsunami/earthquake deaths to be over 80,000. This is the deadliest Tsunami in recorded history.
Posted by Rick Boyne at 9:07 PM No comments:

Reuters now reports that 63,000 people have lost there lives in this disaster. There is a website that lists victim status for tourists and residents in Thailand here. CNN reported last night that of the 1010 people killed in Thailand, that over 700 were tourists from other countries, mostly European. I read today where the death toll in Thailand was now over 1500, but is expected to climb dramatically. Of course, it no where compares to the tens of thousands killed in India and Sri Lanka. There were more than 60 killed by the waves in East Africa.

I am getting email from people I don't even know asking about how things are here in Thailand. Here in Chiang Mai, we simply have not been physically affected by the disaster. We are nearly 1100 miles from the epicenter, and approximately 250 miles from the ocean with a mountain range between us. Generally, in Thiailand, only the Southern provinces that border the Andaman Sea have been affected. I have place a map of Thailand below to help see what it looks like here.
Posted by Rick Boyne at 8:14 PM No comments: 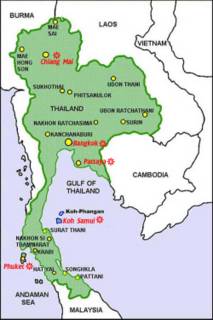 Map of Thailand
Posted by Rick Boyne at 8:10 PM 1 comment:

When I say lost, I, unfortunately, mean LOST. Most of the deaths occurred in Muslim, Hindu, and Buddhist areas, therefore, these poor souls went into eternity without the saving knowledge of Jesus. That is the true catastrophe.

I also heard this morning that huge waves hit the East coast of Africa. The power of these earthquakes are incredible.
Posted by Rick Boyne at 8:36 PM 1 comment:

The USGS has upgraded the earthquake to a 9.0! The USGS has a really cool map of the event on the above link.
Posted by Rick Boyne at 9:06 PM No comments: 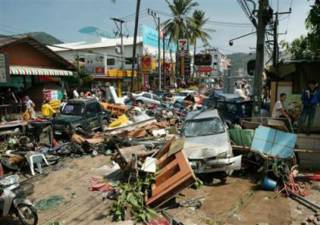 Well, they say the toll is up to 11,800. What horror these people faced as a wall of water as tall as a three storey building crashed upon them!

Posted by Rick Boyne at 8:55 PM No comments:

Within 30 minutes of my previous post, the expected death toll is over 3100.

Posted by Rick Boyne at 5:33 AM No comments:

A HUGE earthquake (8.9 on Richter Scale) hit an area off the coast of Sumatra this morning triggering a 30 ft tall tidal wave that swept across the western coast of Thailand. We are 1087 miles north of the epicenter. Here is a link of the USGS Event Map. My younger daughter, Emily, wanted to know why someone was shaking her bed. Otherwise, the shaking lasted for about 60 seconds and was very mild, with no reported damage in Chiang Mai. We have a friend who was on a boat in a cove in Phuket when it hit. She said the water literally emptied out of the cove and the boat sat on the ocean floor. Fortunately for her and the other passengers, the cove protected them from the tidal wave and they were all safe. As of this writing, they are estimating that 2200 people have lost their lives from the tidal wave and earthquake. I fear to see what tomorrow's news brings.

Posted by Rick Boyne at 4:50 AM No comments:

Todd J.,
Merry Christmas to you and the missus. (and the kids).

Today is our office Christmas party, then, traditionally, we go home after the party. YEA! I really need a break.

I may or may not post from home. We'll see!

Posted by Rick Boyne at 9:01 PM No comments:

I took my younger daughter Christmas shopping last night at the night market to buy her mother something for Christmas. I had so much fun. She wanted to eat at Burger King then go shopping. In the night market, she was wearing her BK crown. Everyone we passed looked at smiled at her. She was so cute. We found a couple of nice silk blouses. Then, she wanted to buy something to "put in Mom's stocking". She was picking out things that would barely fit in the living room. Finally, I showed her that whatever she picked out had to fit in my hand. It is amazing what defining parameters can do!

Only 3 more days until Christmas!

Posted by Rick Boyne at 8:30 PM No comments:

Posted by Rick Boyne at 3:50 AM No comments: 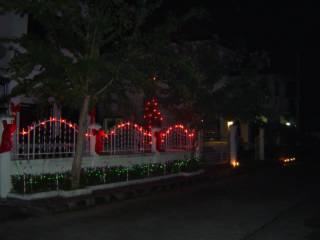 I have attempted to decorate our house for Christmas. This isn't the best night picture I have ever taken. Sorry about that. I am using lights that I bought at Wal-Mart (the large red ones and the green ones in the bushes) and have them on a transformer. I bought some other twinkle lights at the local Tesco-Lotus that work fine on 220v. I also have some of those really neat old-fashioned Noel candles that we got at Wal-Mart or Target in Tulsa. I had to do some creative electrical engineering to bypass the 110v fuse to get my 220v florescent bulbs to work.
To tell you the truth, it is a bit scary. But, it is pretty.

For the past week, the night time temps have been in the mid to upper 50's. What a delight! My kids and wife, however, think it is akin to torture. They go to bed cold and wake up cold. I must admit, too, that it is quite cool in the mornings. I am really enjoying my hot coffee. The daytime highs have only been in the upper 70's to lower 80's. Oh! How I wish it would stay like this year round.

Posted by Rick Boyne at 1:47 AM No comments:

Well, I got the email today that says we won't have a major change in our lives. I am both disappointed and relieved. I guess we are in Chiang Mai to stay for a while.

Posted by Rick Boyne at 9:51 PM No comments:

That should pretty well take care of all doubt!
Boomer Sooner!

Posted by Rick Boyne at 1:18 AM No comments:

Saturday, Oklahoma is supposed to play Colorado for the Big 12 Championship. What a load of huey! Oklahoma is undefeated and Colorado is 7-4. Just because there are two divisions in the conference shouldn't have to mean that an undefeated team can't be number one without playing the other division. This is insane! How can a 7-4 team be the champion even if they beat the undefeated team? Colorado is 4-4 in the conference. Even if they beat OU, they would still be 5-4 in the conference and OU would be 8-1. Common sense says OU should be the champ with OR without a "championship" game.
Posted by Rick Boyne at 10:20 AM 2 comments:

Last night, as I was securing the office building, I went back to the front door to lock it. I caught my foot on the lip of the top step and took a really big tumble. I mean my feet were literally over my head. I really hurt my shoulder, neck, back, hip, and knee. I guess I'm getting too old to do acrobats.