Today marks 15 years that I first began my blog. I was in Thailand at the time and thought it was a good thing to do.

My blog has certainly suffered in the past 5 years or so. Facebook fulfills my need for posting pictures and such.

But the blog has it's place, too. When I want to mark an occasion or when I want to expound on a subject that might be censored by FB, I write it here.

There is a big of ego-stroking, I'll have to admit, in having a blog with your name on it. Frankly, when I bought the domain, I was hoping to become a published author and this would be my platform. I still hope and dream.

Thanks for reading.
Posted by Rick Boyne at 12:30 AM No comments: 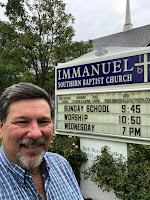 Today marks 12 years that God called me to pastor Immanuel Southern Baptist Church. I have seen many blessings in these 12 years. Many ups and many downs. Many joyful occasions and many sorrowful ones.

I have baptized new believers and presided over baby dedications, baptisms, weddings and funerals. I have offered countless prayers for the sick or discouraged, delivered somewhere in the neighborhood of 1000 messages, and led thousands of songs.

I've had pies in my face, been dunked in a dunk tank, and dressed up in crazy costumes for Vacation Bible School. I driven thousands of miles, attended hundreds of meetings, and know how to navigate every hospital in NE OK.

But it isn't all about me. For sure. It is God Who has been at work at ISBC. He is the One who has saved souls and transformed lives. He is the One who gives comfort and healing. He is the One who stirs the hearts of men and women, boys and girls, to hunger for His Word, to live according to righteousness, and to have a passion for the lost. I am merely a tool in His hand.

I praise God for His faithfulness to His congregation and to me and my family. God is good, all the time!
Posted by Rick Boyne at 11:00 AM No comments:

I've been thinking about it for a long time, as I actually created this post on October 5, 2010, in anticipation of this day.

The Bible says to "count your days", so I did!
Posted by Rick Boyne at 2:16 AM No comments:

A Quote from my Sermon 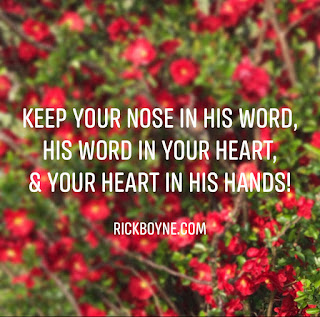 My Grandmother Was A Life-long Democrat

My maternal grandmother was a life-long Democrat.

In the fifteen to twenty years prior to her death, she really razzed me for ditching the Democrats. Her relatives would pull funny pranks on her like getting a picture of George Bush and having it faked autographed to his "biggest fan."

She was of, what I would call, the "old Democratic party." Back before they changed.

A few years before she passed away in 2012, after Obama had been president for a couple years, she called me and said she desperately needed to speak with me. While we didn't see eye to eye in politics, we held the same moral values.

She said that she felt the Democratic party had changed to the point that she no longer felt comfortable calling herself a Democrat. She said they no longer were for the common man, but seemed to be trying to tear America down.

She asked this question, "Without becoming a Republican, what else can I be?"

I knew this was something very serious, as for as long as I could remember, she said she would always be a Democrat.

In the end, she finally asked me about the Republican party.  As I explained things the best I knew how, she exclaimed, "Well that's not what I thought they were at all!" She went on to say that they sounded more like she believed than she was led to believe.

She didn't make it to the next presidential election. As her health rapidly declined, I don't think she was ever able to register in a different party.

But I know that this life-long Democrat left the Democratic Party over values.

In the 2016 election, they completely rigged the system against Bernie Sanders, then reportedly paid him off for his trouble.

In the past two years, they have doubled down against the traditional values in America, seemingly for the sole purpose of getting votes to remain in power.

They are willing to kill babies at the time of their birth.

They think the government should pay for sex-change operations.

They think the borders should be left wide open.

They have openly called for the confiscation of guns.

Here's the deal. I'm not advocating anyone necessarily becoming a Republican, but please, for the love of God and country, walk away from the Democrats. Wake up and see what they are doing to our country.

No political party is perfect, for it is man's institution. And good grief, the Republicans have their own problems! To be honest, I wish we had something called the Patriot's Party that was the real deal alternative to the the big 2.

Most of the local elections where I live seldom have any third party candidates, and often, they only have Republican candidates, so, I'll stay put where I am for a while. I'd almost become a Libertarian, except for their views on abortion and marijuana.

But it says a lot to me, when a woman in her 90's, is seeking to find something different because in good conscience, she could not longer be a Democrat.
Posted by Rick Boyne at 1:29 PM No comments:

A Tribute to Bill Sherrill


My friend and mentor, Bill Sherrill, finished his journey on this earth and went to be with his Savior, Jesus Christ, this week.

I first met Bill back in 2007 when I first arrived back to the US after serving with the IMB for a decade.

A lot of what I have to say about Bill, I wrote in a tribute to him when he retired two years ago because of the effects of a brain tumor and its treatment.

Here is that tribute:

For the past 9 ½ years, you have been my pastoral mentor. You have invested in my life to help me be a better pastor; a better man.
You have walked with me through some very difficult times in ministry and in my personal life and celebrated with me when all seemed to be right in the world.
Bill, you are an example of a godly man. You are generous and loving. I know you to be righteous and zealous for the Lord. In the face of difficult circumstances, your motto has been, “I’m just trusting the Lord; He knows best.”
When Sally and I first returned from the mission field, you spent hours with me helping to determine what God had next for us. You spent an entire day driving me around to all the pastorless churches in our Association and prayed with me at each church for God’s direction.
Over countless meals, we’ve discussed theology, missiology, eschatology, soteriology, ecclesiology, and every other kind of ology you can think of.  And sometimes, just talked about the weather, because that’s what friends do.
We have laughed together; cried together; traveled together; worked together; and even schemed together.
Through all of this I have come to know several things that are patently obvious:
You love the Lord with all your heart.
You love Beth and married WAY above your station.
You love your family: your kids and grandkids.
You love this Association.
You love people and want to see lost people saved and God’s kingdom increased.
I also know that you care about me.
[And if you know Bill at all, you know he cares about you, too.]
As you write this next chapter of your life, I want to remember that God isn’t finished with you yet. You don’t get to fully retire from ministry until you hear “well done, good and faithful servant.” I want to encourage you to find a place of service. As long as you are breathing, you are important in God’s Kingdom.
I want to thank you, Bill, because you’ve made a difference in my life.


We are going to bury Bill's earthly tabernacle today. But, as fellow believers in Jesus Christ, we will see him again. I'm going to miss my friend.
Posted by Rick Boyne at 10:33 AM No comments:

When I was critical of Obama, I was accused of hate speech. When I express approval for Trump, I am accused of hate speech. Yet, actual threats and hate speech towards POTUS45 are not just ignored, but encouraged.
I found out today, that anyone who rooted for the Rams in the Superbowl was against Trump and anyone who rooted for the Patriots was racists and pro-Trump. That's news to me. And, that is just about the silliest thing I've ever heard.
I really thought things were improving after the disaster called the Obama Administration. He single-handedly set back race-relations 100 years and placed incredible moral stumbling blocks for the easily influenced in the form of gender/sexuality/marriage ambiguities.

Is it all Obama's fault? Of course not. But he certainly wasn't America's savior.

Is Trump America's savior? Of course not. But at least he doesn't hate America.
A few days ago, I was accused of being a racist because I suggested someone check their facts. CHECK THEIR FACTS. Wow.

Let's give this racism/hate speech card a rest for a little while. Maybe we just all need a break from Facebook and Twitter....
Posted by Rick Boyne at 4:11 PM No comments: