Office of the President Elect? 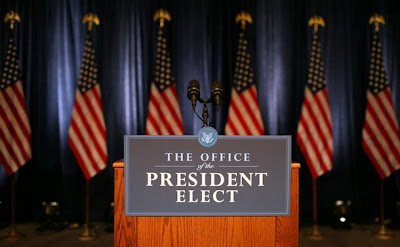 Gimme a break! What an ego! What utter nonsense!

Obama, or his lackeys, MADE UP this office! No previous president elect has ever dared present himself in such a self-serving manner. Why does Obama seemingly NEED to have such an office? All other presidents elect have simply made do. Why the need to plagiarize the Great Seal?

In fact, according to the Constitution, he is not "officially" the President Elect until the Electoral College casts their votes on December 15.

The first time I saw this new "office", it struck me as odd. The more I think about it, the more bizarre it gets.

Don't ask me how I really feel about this sign!

Ostentatious is, I think, the word describing my assessment of the “-Elect” sign. However, the following, from Word’s thesaurus, also seem appropriate:

Thanks for visiting my blog and taking time to comment!

I have heard of this office before. I know the term was used in past transitions and was in fact created by statute in 1963 in the "Presidential Transition Act of 1963", so this is not some new innovation. There are several Federal statues that concern Presidental transitions.

President Bush himself convened a big council in the government to assist with the transition, and for the first time the White House is giving interim security clearances and access to classified information to the incoming team. This is at Mr. Bush's direction, and based on a law he signed in 2004.

His style in this transitory office might be an innovation, but the office itself isn't.

I humbly disagree with you. I am aware of the Presidential Transition Act of 1963, but it does NOT call for an "Office of the President Elect". I, personally, don't recall it ever being used before. That is why it struck me as odd.

You'll have to do a "more than cursory" search of documents on Google to find anything related to the term "Office of the President Elect". And when you do, it will be almost like a footnote, designating that a letter or memo came from Pres. Elect Richard Nixon's New York office, or some such thing.

I contend that it is an over-statement of Obama's designation as President-Elect to gain attention/credibility for a reason that is not yet obvious to me.

Rick,
I agree Sen. Obama (and I thought I said so) is using the language of "office" in a new way. We are talking past each other a bit, I think. There is far less disagreement than may appear, at least I believe so.

However every time I have been given "office space" I called it my "office", and I think that is the basis of Obama's term.

The 1963 act formalized an office for the President Elect to work out of, and it is transitory. That is all it is.

This transition is very different in that there is a more formalized approach than ever before, provided by President Bush. I think the Clinton/Bush transition was difficult due to it's shortened time and election conflict. That experience seems to have encouraged Pres. Bush to "upgrade" the process. It is also combined with a economic crisis and an unpopular ending Presidency.

With all that, the transition takes on added influence, and this President-Elect is more visible than normal.

At least that is my take on it.