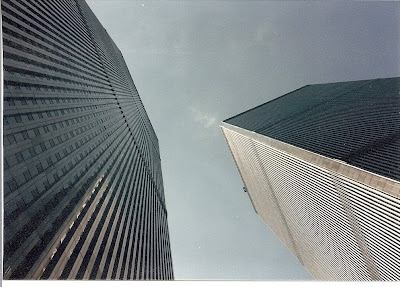 I first visited New York City in 1980. I was a youth delegate to the United Nations. New York and the UN was the center point of a 3 week US tour, mostly on the East Coast. I remember seeing the World Trade Center for the first time. I was completely awe-struck. As a teenager from Oklahoma, I couldn't believe the immensity of the buildings; their tops scraping the sky. As we rode the elevators to the top, I was again taken back by the incredible view it afforded of all of Manhattan, the Burroughs, and New Jersey.

I returned 5 years later to be a sponsor for the UN Youth Program. Each week, we took large groups of teens to the UN and to tourist spots in NYC. My favorite was always the WTC. The view provided was just too incredible to pass up. I saw the same reaction in the youth delegates that I had experienced when I was there in the same capacity.

We lived in the Manhattan East Apartment Hotel at the corner of 32nd and 7th Ave. We were pratically right across the street from Madison Square Garden and the view out of my hotel room looked up at the Empire State Building. (the picture below was taken from that famous landmark) That summer in New York is one that I'll always remember. 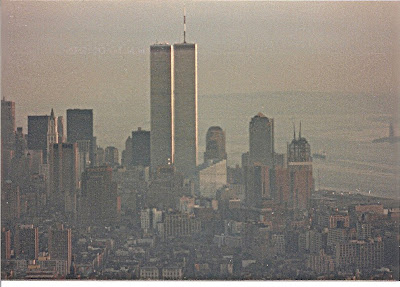 Another thing that I'll always remember, as will you, is where I was when the towers fell. My family and I were serving with the IMB in Cote d'Ivoire, West Africa. I was doing email when Sally called me in to see CNN. We had just subscribed to satellite TV and she was channel surfing. She said that a plane had just flown into the tower. As I came in, she said, "here's the replay", but that plane hit the second tower.

Cote d'Ivoire is 50% (or so) Muslim. There is ALWAYS tension there, but mostly because the ruling tribe is Catholic and the oppressed tribe is Muslim. But the tensions exist, nonetheless. We didn't venture out much for the next few days. Finally, we saw that there weren't any accelerated danger in Abidjan (our city) so we went out for groceries and a little shopping. One of the places we went to was owned and operated by Lebanese Muslims. As we walked in, the owner asked us if we were American. After a quick prayer, we acknowledged that we were. He stood up to shake our hands, tell us how terribly sorry he was, and that his own brother had been in the towers that day, but was only on the 3rd floor and had escaped with his life.

May God have mercy on us all.
Posted by Rick Boyne at 8:20 AM

What a powerful story...and memory...

I remember that my sister called. She said, "You need to go home. Something about American Airlines." (She didn't want to scare me more than that. Hubby works for AA.) I was at the top of the hill dropping off my children at the elementary school. I didn't leave the TV much that day or for days that followed. I can still remember just how quiet the skies were overhead. We are in the flight path for our airport. I also remember the day I first saw a plane flying and how EERIE that was - and scary. My husband was going to leave town for his annual trek to Reno (National Championship Air Races - he's there now) and, of course, flights were no happening. I remember vividly the images I saw on TV. I also remember learning as a parent that I had to be very careful what my children were seeing/hearing throughout the experience. It was a grow up time for me, I think. It was a vulnerability I wasn't used to.