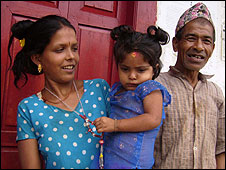 After 24 failed marriages, a 49-year-old porter in eastern Nepal says that he has finally found happiness in his latest union.

The simple reason is that the landless labourer's latest marriage seems to be working out, unlike the previous ones.

Ramchandra Katuwal, of Khandbari municipality in Sankhuwasava, and his wife recently celebrated their seventh wedding anniversary.

He says that his marriage to Sharada has been a "journey of happiness".

It's a wonder the 3rd potential father-in-law didn't kill him!