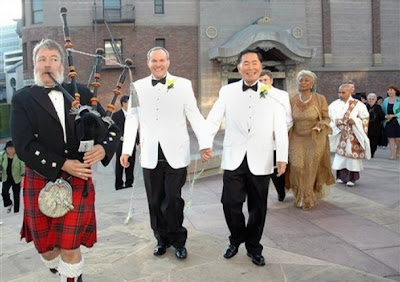 George Takei, who played Mr. Sulu on Star Trek, "married" his long time "partner", Brad Altman, at a ceremony in Little Tokyo, in LA, on Sunday. The two made a grand entrance to the tune of "One Singular Sensation" from the Broadway musical "A Chorus Line." The ceremony was performed by a Buddhist priest.

Lt. Uhura and Mr. Chekov were both in attendance, but Mr. Spock's logical mind knew there was no way that two men could actually marry each other, so he and Capt. Kirk stayed home.

YUCK!!! Leave it to those on the LEFT COAST to make a big todo out of this nonsense.

Then again, we should have known....

Beam me up Scottie...

Why do you waste perfectly good blog space of stuff like this? Tell me WHY?

Because I want to voice my disdain.

The man in front is wearing a skirt! :)

You are good man Rick...my answer to Anon would have been..."Because this is my site and I can write about anything or nothing, if I want to..."

Well, Anon (aka your sister), thinks it's ridiculous to even give the topic your attention! And when this is the way I keep up with my beautiful nieces, I don't like having to wade through the muck!!!!! So, Good Man, (aka my brother), it IS your site, and I do have to read it because you forget to keep me in the loop, so write about those beautiful daughters and leave the muck alone!!!!!!!!!!!!

My goodness...you and Steve need to relax! :)

(Can you feel the waves of Takei's "marriage" sweeping into OK and threatening "marriages" throughout our God-fearing land?)

I"m a "Left Coaster" myself, so consider the source, but as a pastor I believe you'd be better off spreading Christ-like love and forgiveness rather than spewing the typical "Christian" ire and narrow judgement. It's easy to hate, isn't it? "To love those who displease you is to follow in the footsteps of Christ..."

Of course, those are big footsteps to fill, aren't they?

There is no love because of the public nature of the "wedding". Why DOESN'T this offend you?

To not condemn sin is a dangerous thing indeed. If you play with scorpions, you'll eventually get stung. When you allow same-sex marriages, you set yourself up for judgment.

Sometimes the truth hurts; especially if you are the one violating it.

"Narrow judgment"? Interesting choice of words to say the least. Have you considered Matthew 7:13-14? Take a look!

Hate? Hate? I didn't say a thing about hate! Why did you bring hate into it? Since you told me how you thought a pastor should "be", let me tell you how a pastor should be. A pastor should NOT be soft on sin. Too many people are afraid of offending people and are "nicing" them right straight to Hell. Does it offend you to know that God sees homosexuality as sin? Too bad. There is a standard that I will not compromise to make someone feel "good".

I'm the same way with gambling, drunkenness, adultery, pornography, and any other socially acceptable sin that God deplores.

Come on, have some guts to sign your name to your SoulForce opinions. Is this JB?

You disgust me, Do you really think loyal trekkers are going to stop liking George Takei just because of your homophobic prejudice? I doubt Leonard Nimoy or indeed the character he portays would stop liking a life long friend either.

However, the "wow" factor stops there. You make the assumption that I am homophobic. Not at all. I am not uncomfortable around homosexuals. To me, homosexuality is just another sin. Prejudice? That's a judgment from yourself upon me, isn't it? Just because I cry "foul" when it comes to the media's obsession with homosexuals and same-sex marriage, does not make me prejudiced.

YOU ARE A COWARD to post an anonymous comment. Are you gay, too, and are afraid to admit it?

I disgust you? You don't even know me, do you? How could I disgust you? Perhaps what I wrote may disgust you, but I am at loss as to how you can be disgusted by me without knowing me. And you accuse me of being prejudiced? No one said you had to read my blog or to comment.

I think anyone living the gay 'lifestyle' is an abomination and should be stricken down regardless of their social stature - tv star, politician or historical figure.

Heck, they claim that one in ten people is gay. Right... That would mean roughly a tenth of the people mentioned in the Bible were gay. Who were they I wonder? I suppose the most likely candidates are David, Jonathan, Paul and Jesus? (hard to narrow it down actually...)

Hmmm... Jesus was born in a manger so I guess it makes sense he would also choose to be born into a persecuted social class, like... the gays.

The Vatican has recently apologized for that one (maybe more) 'mommment of indiscretion' between Jesus and John the Evangelist (the "beloved disciple") - I'm sure it was all very 'Brokeback Mountain' with a lot of pushing and 'you fag!' comments.

So Jesus was gay.
And black. (Does the bible permit blacks to marry? It doesn't matter. I can make the bible say anything I want teehee).

Thanks for dropping by and taking time to make a comment.

I'm not comfortable agreeing with your POV. While it is indeed an abomination before God, to say that homosexuals should be "stricken down" is taking it too far.

There is a difference of pointing out and condemning sin and a sinful lifestyle and playing God by dishing out punitive judgment.

We are commanded to judge in the same way we want to be judged. (Matthew 7:2) I would rather have my punishment fall into the hands of a merciful God than to be at the hands of an angry vengeful man.

Whoa. I never said that I want to personally strike the gays down... I'm like you Rick, tough on sin! - but I don't appreciate your implication that I want to play God or that I'm an angry vengeful man. It makes me seriously wonder what other passages of text men-of -the-clothe, like yourself, misinterpret.

Sorry, I must have misinterpreted your first line I think anyone living the gay 'lifestyle' is an abomination and should be stricken down regardless of their social stature as wanting to pass punitive judgement on people.

I apologize for any offense taken.

Rick,
I think the reason previous commenters called you homophobic and hateful is because you included words like "YUCK" when describing these people and their lives. This is not loving, this is not forgiving, this is not turning anyone from "sin", this is not trying to "fix" anyone's homosexuality (or whatever it is you think should be done for gay people). Your post is not being "hard on sin," it is simply singling out and mocking a declaration of love between two individuals. If you don't agree with their relationship being recognized, that's fine. If you think there is something inherently wrong with homosexuality, I suppose that's okay too, as everyone is entitled to their personal beliefs. But who is benefiting from this post? Is anyone being converted or "shone the light" by a photoshopped image of Mr. Sulu in drag makeup? Your approach is offensive because it is derogatory. There's a difference between being steadfast in your beliefs and ridiculing something because you don't like it. You might as well have posted a picture of someone in black face, dancing and singing minstrel songs. There's being opinionated and then there's being bigoted. In this post, you are the latter.

Thank you for taking time to leave your comment. Isn't it a wonderful thing to have the freedom to express your opinion?