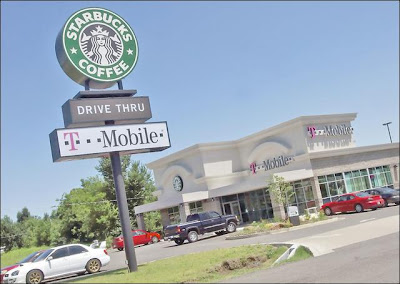 Muskogee Starbucks
That's right. The only Starbucks in Muskogee will close it's doors for the last time on Friday. I don't make it to Muskogee but once or twice a week, and Monday mornings usually included a stop by for a vente "coffee of the day".

But, since Starbucks has decided to close more than 600 stores, Muskogee's store got caught in the trap.

I spoke with the folks yesterday. They didn't seem terribly upset, but did mention that there would NOT be a sale of the merchandise. It would simply be packed up and shipped off. That doesn't sound nice to me.

I think the biggest problem with this store was its location. There is a huge customer base willing to purchase coffee, but they put it in a stand alone building off of a by-pass, not convenient to most commuters. Granted, it is across the highway from Wal-Mart, but it still isn't the best place for a coffee house.

The next closest Starbucks is in Broken Arrow INSIDE the Bass Pro Shop. Oh darn.
Posted by Rick Boyne at 11:40 AM

Well, you will have to come visit our family and your sister's family more often! Did you know there are TWO Starbucks locations here? One is a cafe and the other is a licensed Starbucks, located inside the Target store. My favorite coffee - the coffee that is made at church. I truly drink ONE CUP per week and look forward to it. (Cream and Sugar please!) Last week it was so good I refilled my cup part way through which is something I NEVER have done before. LOL!

Starbucks...guess what...I really don't like Starbucks...too strong for me! I guess I am a whimp!

Hey Rick, Just a heads up....there is a Starbucks in side the VA hospital....still not in a great spot, but there is one in there..

Thanks for the info! I certainly did not know that!

I'll check it out.