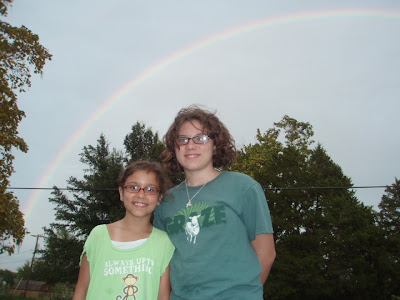 Last night, I grilled some chicken and some corn on the cob. While it was cooking I happened to look up and saw a complete horizon to horizon rainbow! It is the first one of those I have seen in many, many years. I called the girls out and by the time they came out into the yard, it had turned into a complete DOUBLE RAINBOW! It was absolutely astonishing!

One of the girls mentioned, "Isn't it neat, that even though we have Gustav bearing down on us, God still promises He won't destroy the earth by a flood!?!". I thought that was pretty neat in and of itself.
Posted by Rick Boyne at 9:27 AM

The girls are so cute I hardly noticed the rainbow!