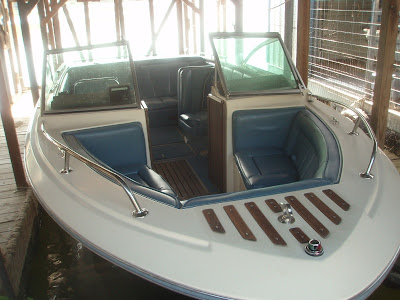 I posted about Mom and Dad's new boat that they bought back in the Spring here. Above is a picture of it I took over the Fourth of July holiday. It was one of the nicest boats you could ever imagine! Mom had been restoring all of the teak wood accents and flooring. Dad had it completely re-upholstered. It was beautiful! 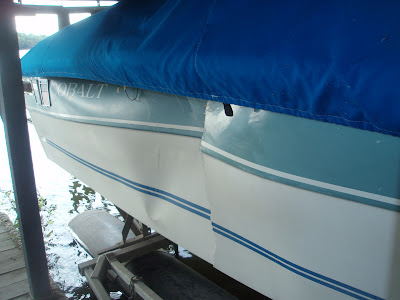 Over Memorial Day weekend, my brother, Pat, took it out and was having a good time. A friend of his was going to drive by really fast on his Ski-do, turn, and drench Pat and his wife, Debbie. However, at the last moment, he wasn't able to control it and rammed full speed into the boat. 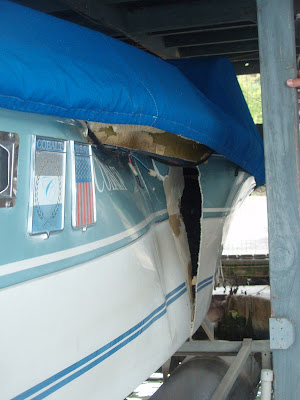 The force of the impact broke completely through the hull of the boat. Pat told everyone to don their life jackets and he drove full speed back into the cove to try to get it in the dock before it sank. Fortunately, the driver of the Ski-do wasn't hurt, but Debbie had her knee right up against the hull and it hurt her knee pretty bad and ended up at the emergency room. Pat was able to make it back to the dock (because of the way the hull broke, as long as he kept moving, water didn't come in) and it didn't sink.

Thankfully, Debbie has pretty well recovered and there was no serious injuries. The man's insurance will pay for the boat, as it is a total loss...
Posted by Rick Boyne at 2:22 PM

Having taken the free tour at the Ranger Bass Boat factory in Flippen, Arkansas, I know why the boat was totaled. Boats are actually glued together. You can't take some tools, dismantle them, and replace parts. The entire boat when finished is one huge part.
It was a beautiful boat. Glad insurance will pay for it.
B & J S