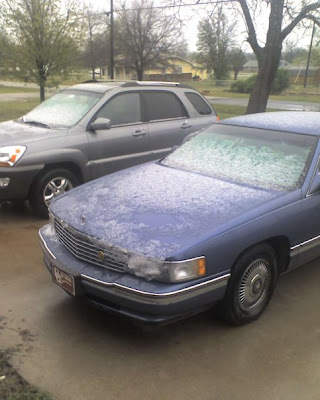 Snow on the cars before we left

So, I'm driving our friend, Renee back to OKC, where she will catch a ride to Texas, to catch a ride back to Arkadelphia for college. It had snowed a little bitty bit when we left, but by the time we get to I-40, (about 40 miles away) it is coming down pretty good. 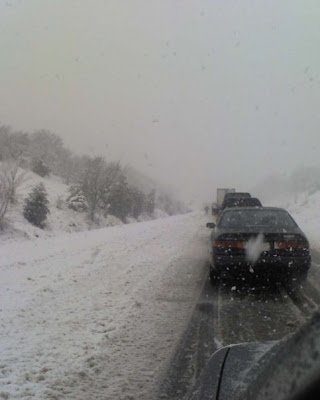 Traffic at a standstill on I-40
Within 10 minutes the traffic was moving again, but at only 25 mph. At this rate, we were going to get to OKC at about dark-thirty. Not acceptable if I am to make it back to Wagoner in time to preach for Sunday morning.

We decided that it would be prudent to turn around and worry about getting Renee to school another day-another time.

We pulled off the highway and found a convenience store. This time, however, I was in my wife's Kia Sportage 4X4; I wasn't going to get stuck again! We mosied into the convenience store to use the facilities and the power had been off for 30 minutes. I helped a man, in a mini-van, who was stuck to get un-stuck. We piled back into the Kia and off we went!

We got home at about 3 pm and the snow was starting to accumulate in Wagoner. Sally and I were supposed to be a part of a missions forum tonight in Coweta, but they called while I was typing this to say that it is cancelled. That is a blessing, of sorts, for us. 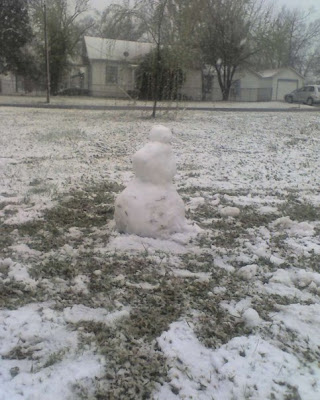 So, by the time we got back home to Wagoner, the kids had already been out playing and had built a miniature snowman. Not bad for March 28!

Does your friend by any chance go to a fabulous school named Ouachita? :)

Well, she sure doesn't go to Henderson State! ;-)

Yep, she's a sophomore at OBU-East. I visited the campus for the first time yesterday. It was really nice!

So, I'm guessing it holds a special place in your heart, too?