Yep, the 75 wonderful degrees it is today sure makes me think that I'd love to be at a Sooner's Football game! 75 degrees on August 18! WOW!!

I remember the very first Sooner game I went to. I was a freshman at OU and I had a corner seat on the student side of the east end zone. It was right above the Sooner Schooner. I was in heaven. Except, it felt like hell. I think it was nearly 100 that day. 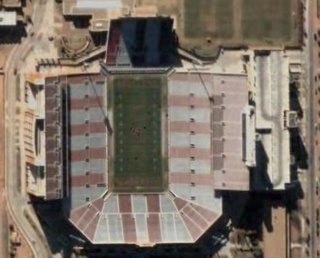 As the years went on, I slowly was able to get better seats, until the culmination of my time brought me a seat on the 50 yard line, 20 rows up. It was absolutely perfect. And, of course, we were National Champions that year!!!

Yep, I could use a good dose of Sooner football in this weather. Of course, with temperatures like this (75 degrees at noon) anything would be fun!

Thanks for dedicating this post to me...however, I don't think I like being associated with such foolishness and nonsense...

Is OU fielding a team this year?

Oh that's right, they are playing a real powerhouse for that opening game---UC, right...University of Chattanooga...you guys will probably win by a dozen, be proclaimed early season favorites, shoot to number one in the polls...just ahead of Notre Dame (and the only reason you'll be ahead of them is because ND will not have played a game yet!)

Do I need to take a break from your site until after the season is over for you guys...like two weeks into the season?

Nonsense? Don't blaspheme what you do not understand.

Michael, Which tech? (Not that it matters, anyway.)

Hey Rick! I was thinking about those first tickets you bought, too! Seems I remember a phone call and some sort of friendly bet over those tickets that cost you dearly! (Driving that MG and the steak dinner were well worth it! LOL!)

Of course I can see the picture of the stadium...what'd you do different?

I don't know who all you bumbling football fans are but you're football iq seems to be rather low. At least Steve has the good sense to root for an SEC team.