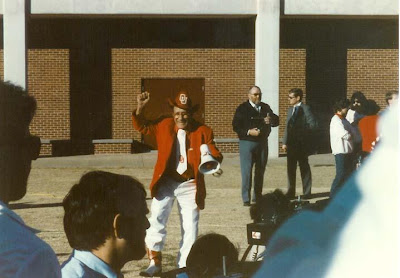 Cecil Samara considered himself to be Oklahoma's Number One fan. He had a complete wardrobe of red and white. He had "O U" embedded in this front teeth. He drove his Model A roadster to the home games with loud speakers blaring "Boomer Sooner". He donated it to the Ruf-Neks at his passing. When he died, he made a specific request that his funeral wouldn't interfere with a game. At his funeral in 1994, his coffin was covered with the flags of the US, Oklahoma, and OU. He requested "Boomer Sooner" to be played at his funeral with instructions for people to clap along (they did).

I shook his hand once back in the early 80's. He was just a nice old guy who really loved his Sooners.
Posted by Rick Boyne at 9:39 AM

We have a word for that in Alabama:

I would have loved to watch him climb in and out of that camper...guess in Oklahoma they don't make things big like they do in Texas...

Brother Rick...if you were looking at a good way to drive your blog commenters (like me) away, you're doing a good job with this nonsense about OK football...

O U embedded on his front teeth? One man's dedication is another man's insanity. =)

So, will it be GA and OU in the championship game?

I went to OU in the late 70's/early 80's and have fond memories of Cecil at the football games. The crowd loved him as much as he loved OU football. He used to shout through his megaphone "Roll on Big Red, Roll on!"