I had the privilege of meeting pastor Qin back in 2004.  He was a gracious and Godly man. 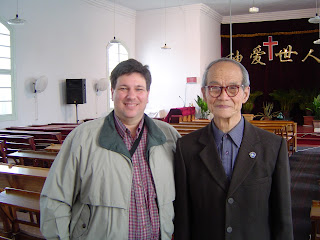 Rick and Pastor Qin in the Old Lottie Moon Church as described in the Baptist Press article below
I'm sorry, but I've cut and pasted the Baptist Press story into my blog.  I have attached the original link to the headlines below:

PENGLAI, China (BP)--A Chinese pastor and his wife were slain Aug. 31 at Penglai Christian Church, where Lottie Moon, an icon of Southern Baptist mission work, served in the early 1900s in Penglai, China.

Pastor Qin Jia Ye and his wife Hong En He, both in their 80s, were killed in the church's office on Wednesday.

The suspect -- a 40-year-old former church member -- was arrested within an hour of the early morning incident.

The couple's violent death is a shock to many, both in China and the United States. The church was closed for 49 years after communists came to power at the end of World War II, reopening in 1988 with only 20 people.

Qin reported 300 baptisms several years in a row. Today, there are 3,600 members.

Chinese newspaper accounts state that the suspect entered the church office carrying an axe and struck the pastor and his wife, killing them both.

The church eventually outgrew Moon's original structure and built a modern 1,500-seat sanctuary next to it with the help of Johnson Ferry Baptist Church in Marietta, Ga.

"From the moment I met Pastor Qin, I could sense a Christ-like spirit," said Bryant Wright, Johnson Ferry senior pastor and current Southern Baptist Convention president. "We are incredibly saddened by this tragic event, but we know one of the Lord's faithful servants is with Him forever in Heaven."

Qin graciously acted as tour guide for a large number of Southern Baptist leaders passing through Penglai who wanted to connect with the community where Moon served.

Wanda S. Lee, executive director-treasurer of Woman's Missionary Union, visited the church during a 1997 China tour. In spite of numerous church responsibilities, Qin and his wife welcomed the group warmly, Lee said, and it was obvious they were well-loved and respected.

"We are deeply grieved at the news of [the] death" of Qin and his wife, Lee said. "It is a great loss to the Christian community."

Candace McIntosh, executive director of Alabama WMU, took seven college students to China in 2008 to experience firsthand the history and work of Southern Baptists. Penglai Christian Church was a stop on the tour.

McIntosh remembers admiring Qin's humble and quiet strength as he prepared for worship, as well as his ability to state the message clearly for all to understand. After the service, Qin spent a great deal of time talking with the team of young women about Moon's legacy.

"He was so encouraged that younger women were there, learning about the history of Lottie Moon and the Chinese church," McIntosh recalled. "I know the legacy of Lottie Moon will live on, but one of its greatest communicators is no longer with us. I know Qin's legacy will live on, too."
--30--
Posted by Rick Boyne at 4:44 PM

By the time of Christmas, the street and roofs of the town are protected with snow. However, it's miles pretty visible to peer the ones snow-protected roads however it is going to be very annoying for you withinside the case you don`t have your woolens packed. Fast Passport