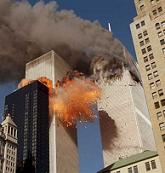 9 years ago a bunch of cowards hatched a plan to kill innocent people.
When they arrived in the afterlife, I'm sure they were a bit confused as to why they were in Hell instead of Paradise.  I'm sure they were wondering where all the virgins were and why they weren't being treated as heroes.
Honestly, I don't want any person to have to spend eternity without God.  But the 22 men that hijacked those plans are not basking in the Glory of God.  Unfortunately, they also took a lot of people with them.
We must realize that not all the people who died on 9/11 went to Heaven.  Just because they were victims doesn't mean they had a free ticket to Heaven.  Just because they were Americans doesn't mean they went to Heaven.  Only if they had placed their faith in Jesus Christ did they go to Heaven.
9 years on, we are still in a war.  9 years on, they still haven't caught the mastermind behind the attack (Bin Laden).  In fact, 9 years later, I fell less safe than I did just 5 years ago, now under a president who seems to have a personal agenda that goes against (at least in my opinion)  the way I think it should be going.
I find it troubling that our president has so many ties to Islam.  I find it interesting that many American Muslims consider him to be Muslim.  I find it disconcerting to see the attitudes in the mainstream media favoring Islam over American traditions.
I'm tired of our American forces being limited in what they can do.  War is war.  Let's "git 'er done."

Finally, to those (foreign and domestic) who seek to destroy America:  you can try, but the American Spirit is too strong to be trampled by a bunch of cowards.  You say you hate us and think we are the "great Satan", but why do so many of your people want to leave your lands and live in America?  Not because they want to destroy us, but because they are sick and tired of living under your oppression.


God Bless the United States of America!
Posted by Rick Boyne at 2:12 AM