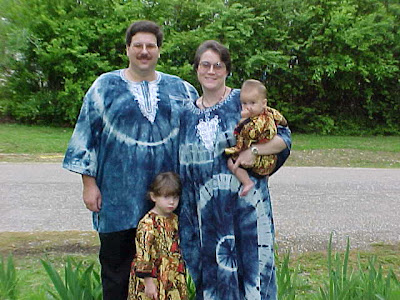 The Boyne Family in 2000
After we lived in Guinea, we were given the opportunity to change our ministry focus. It would entail our studying French in Dakar, Senegal. So, we crated up our stuff and sent it to the Ivory Coast, while we packed suitcases and headed for Senegal. We studied French for 10 months or so and became "functional". I hesitate to call it fluent; that came after much more time in the language, living in the Ivory Coast.

Living in Senegal was almost like being on vacation, compared to living in Guinea. They had traffic lights that worked most of the time, restaurants, things to do and see, and much less government/police corruption! So, here are some of the things I like to remember about Senegal: (There are many more I didn't include)

While we were only there for a short time, Senegal will hold a special place in our hearts. The folks there treated us like family, even though they knew we'd only be there a short time. The Senegalese folks that we got to know were wonderful. I'd have no problem going back to Dakar!
Posted by Rick Boyne at 1:45 PM

... Which reminds me, Have you seen Mall Cop?