For the past several days, weathermen have been predicting the chance of severe storms ushered in ahead of a cold front. They were right on the money. There were several tornado warnings and we were under a tornado watch for most of last evening. The front finally made it to Wagoner at about 11:40 last night. 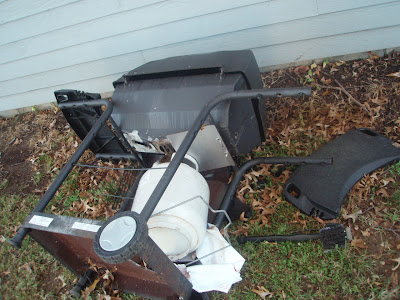 I decided to get up and make sure rain wasn't blowing in, as the winds were raging. Gusts were in the 40-50 mph range. I first checked the dining room window and, sure enough, rain was coming in. As I looked in my half-sleep mode, I noticed that rain was splashing in off of my gas grill. That was odd because it is normally on the back porch/stoop and it is a good distance from the dining room window. 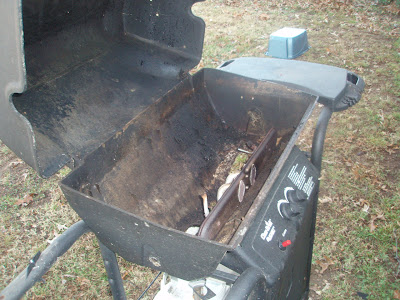 As the morning light came and I was able to get out and look at it, I found that, not only had it been blown from the porch, but it appears to have some damage, too. All the guts were out of it, which shouldn't be a big deal. The left hand shelf was broken off at the screws. That isn't good. Also, the OU SOONERS grill cover was GONE. We later found it about 100 ft from the grill, around the corner of the house. 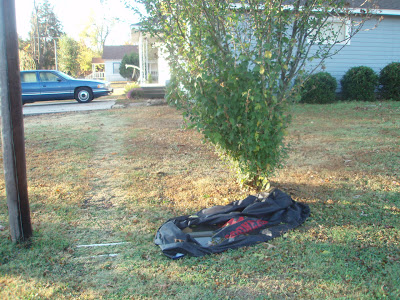 It obviously could have been worse. I know that. Someone about 75 miles away had their house completely destroyed by straight winds. I just found it interesting that it messed with my grill so bad.

This morning, the skies are clear. The wind has stopped for now. It is supposed to blow pretty hard again later. The temps are crisp. It was a nice 46 degrees when I left the house at 7:25.

The blowing away of the OU cover could definitely be interpreted as a sign from God...

Remember God and the fish? Where's your Ninevah, brother?

What did you expect me to say? You throw me a softball like that and I'm going for the fence!

I could have said that the blowing away of the inside of the grill meant no more red meat!

That would have just been plain mean.