Never has 3 little words been so hard to type.

For the past 4 years, the man in the Oval Office has blamed his predecessor for the current American economic situation.

For the past 4 years, George W Bush has been vilified as an incompetent evil leader who led America down a dark path.

For the past 4 years, the man in the Oval Office has refused to take any responsibility for the current economy, despite the fact that it has been on a crash course for the past 3 years.

Poor President Obama. What a mess he has inherited in his second term!  Who is he going to blame now?

There are many, many things that concern me. Not the least of which is the state of the election.  I don't understand how many precincts can have over 100% of voter registration having voted in their precincts?  Or how some precincts can have NO votes for Romney?

I have been accused of being bitter. I don't think bitter is the right word. Frustrated, perhaps. Angry, definitely.  Concerned, without a doubt.

The next 4 years could very possibly destroy America as we know it. Obama is a narcissist that has a past that he pays millions to hide and an agenda that has slowly been unfolding during the first term. We'll see the "more flexibility" come to full fruition during the next four years.

In the movie The Matrix, Morpheus offered Neo the choice between a red pill or a blue pill. The blue pill would allow him to continue to live in ignorant blissful illusion. The red pill meant facing the uncomfortable painful reality. 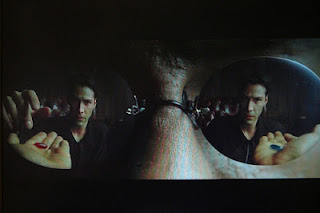 How fitting that Democrats and Republicans are also represented by red and blue. It appears that, (if the election is legally valid) that more Americans prefer to live under the ignorant blissful illusion of the benevolent reign of BHO, rather than facing the painful reality that all is not well.

As of the writing of this post, more than 30 petitions have been filed on the White House website requesting peaceful secession from the USA. While these are not binding, they certainly send a message that there are still quite a few Americans who have decided on the red pill.

The red pill is, indeed, a bitter pill to swallow.

The blue pill, however, goes down just like Koolaid....
Posted by Rick Boyne at 9:06 AM

It's unfortunate those who voted for the current President again only see through rose-colored glasses. I have never had a fear of my husband losing his job because of the field he is in; but this morning I woke up so afraid. Businesses are annoucing layoffs because of Obamacare. Obama promised more jobs in the next 4 years yet there will be even more people losing their jobs in year 5 of his presidency.
God hear our prayers!

Your comment was deleted for the "scumbag" comment. Crossed my line. And since you are an anonymous commenter, there's no recourse for you.