I watched with tears this morning, as President Obama signed the law that repealed "Don't Ask, Don't Tell".

It wasn't tears of joy.

He started off by saying "It's a good day for America."

I beg to differ, Mr. President.

It is definitely NOT a good day for America.  In fact, I would hazard a guess that it is the worse day since January 22, 1973.

Like that day, today our government has made legal what is inherently offensive to God. 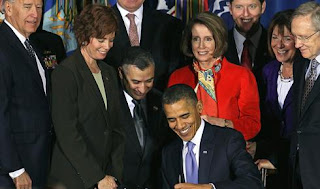 What struck me about it was the applause and cheers from those witnessing the stomach turning event.

Romans 1 has a lot to say about this.


For since the creation of the world His invisible attributes, His eternal power and divine nature, have been clearly seen, being understood through what has been made, so that they are without excuse. For even though they knew God, they did not honor Him as God or give thanks, but they became futile in their speculations, and their foolish heart was darkened. Professing to be wise, they became fools, and exchanged the glory of the incorruptible God for an image in the form of corruptible man and of birds and four-footed animals and crawling creatures. Therefore God gave them over in the lusts of their hearts to impurity, so that their bodies would be dishonored among them. For they exchanged the truth of God for a lie, and worshiped and served the creature rather than the Creator, who is blessed forever. Amen. For this reason God gave them over to degrading passions; for their women exchanged the natural function for that which is unnatural, and in the same way also the men abandoned the natural function of the woman and burned in their desire toward one another, men with men committing indecent acts and receiving in their own persons the due penalty of their error. And just as they did not see fit to acknowledge God any longer, God gave them over to a depraved mind, to do those things which are not proper, being filled with all unrighteousness, wickedness, greed, evil; full of envy, murder, strife, deceit, malice; they are gossips, slanderers, haters of God, insolent, arrogant, boastful, inventors of evil, disobedient to parents, without understanding, untrustworthy, unloving, unmerciful; and although they know the ordinance of God, that those who practice such things are worthy of death, they not only do the same, but also give hearty approval to those who practice them.

The last part of the last verse is pertinent: "but also give hearty approval".

I am simply not able to adequately articulate my thoughts and feelings about what Obama and his consorts have done.

I do know it contradicts God's word and is therefore wrong AND offensive to God.

I know that I will be accused of being "homophobic" or of using "hate-speech".  I am not afraid of homosexuals nor do I hate them.  It is a convenient straw-man argument used by people trying to distract from the fact that God hates homosexuality.  But He doesn't hate homosexuals.

I know that God sees homosexuality the same way He sees murder, adultery, lying, and yes, even gossip.  He sees it as sin.

And the wages of sin is death.

But He sent Jesus to be our sacrifice so that those of us who sin, can be forgiven if we put our trust in Him.

May God have mercy on us as our government continues to take our country to Hell in a hand basket.
Posted by Rick Boyne at 10:13 PM