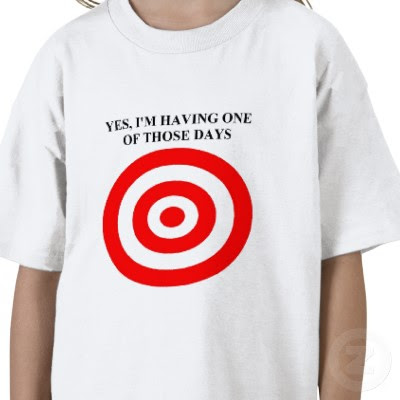 OK, perhaps it's not new, but most of us haven't heard it put quite like that.

I have been in "the ministry" for quite some time now, but only a vocational pastor for a little over two and a half years.

While it's not a pleasant mind-picture, if I removed my shirt, you could see the big target painted right on my chest. If I turned around, you could see on on my back. I don't even want to talk about bending over....

As our church is taken off the bench and gets back in the game, so to speak, several different dynamic forces are in play.

Folks, pray for your pastor. If he isn't doing a "good enough job" then pray for him; don't gripe about him to others. If you want to talk about him, talk about him to God. Most likely, your pastor has the best in mind for the church; just because you don't agree doesn't give you the right to lam blast him. You and your pastor are on the same team, and that team isn't the pastor's team, or your team, or even your church's team; it is Jesus' team.

An old wise retired pastor told me yesterday that every church has the Devil's Emissary; someone seemingly appointed by the Devil, himself, to cause strife and division within the church. An unregenerate church member who is there to carry out the cause of Satan; to kill, steal, and destroy. Unfortunately, more often than not, it is the pastor who has the target on his back.
Posted by Rick Boyne at 8:46 AM

Good post Rick. 2009 was the end of my honeymoon after 3 pretty incredible years. The enemy's emissary got in there and did her tricks. But after some pruning it appears that we are on the rebound. It does get better. Oh btw: I think my target was between my eyes. :)

The part that really wasn't fun was when my family had targets on them as well.

The retired pastor of FBC Springfield, MO moved in next door to my Dad (in a retirement condo) and they began just droping in on each other. I was there one day when Brother Guy looked at me and said "Bob, don't you ever think that when you're my age the devil will leave you alone. I'm 88 and he's after me as much now as he ever was." Good advice on something I hadn't thought about.
Bob S