Oral Roberts - Dead but not gone 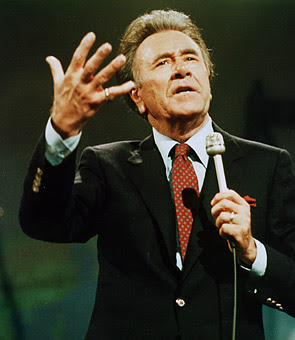 Tulsa TV evangelist and university founder, Oral Roberts, died yesterday with complications from pneumonia. He was 91.

I have incredibly mixed emotions about Oral Roberts. Personally, I think he was a fake and his "healing" ministry was a sham. I am sickened by his "health, wealth, and prosperity" fake gospel. Unfortunately, that will be his legacy.

The "gospel" he preached claimed that God didn't want you to be sick or poor. SHOW ME IN THE BIBLE WHERE GOD EVER SAID THAT!!!!!

I heard a story from one of my older church members that goes like this:

"Back in the 1950's I went to get a haircut in Tulsa. The barber asked me if I had ever heard of Oral Roberts. We talked about him for a while and he admitted that he was Oral's father-in-law. We had a nice chat. Later that same week, I was watching Oral Roberts on TV from a crusade in Florida. A man so crippled that he could hardly walk came to the front. Oral exclaimed, "my beloved father-in-law! What has brought you to this pitiful circumstance?" At that, he seized hold of his father-in-law and "healed" him. He left the arena no longer limping or walking with a crutch."

My member told me that once he saw "that baloney" on TV, he knew Oral Roberts was a fake.

The irony is that this leading proponent of the H,W, and P gospel himself fell to illness. I guess he didn't have enough faith, eh?

One of the strongest influences in my life, a chaplain with the State Police here in Michigan, attended ORU. In fact, he calls it "IOU", since he owed so much money to earn his D.Min. lol

I know that God can use anyone. Rick I do believe that there were people saved through that false religion, and that is exactly what it was religion. This is something I have always struggle with these H,W,and P preacher. Are they real? I want to say no, but is that putting God in a box? Now I need to stop and remember it is Christ who saves not Skip. I do agree I wish his false teaching would have died with him. IOU is also in line with Southwestern!

Well, even though Mr. Roberts may be gone, there will no doubt be more like him to come. We live in a society that prefers entertainment over truth, fallacy over fact. Those of us who are knowledgeable in God's word will always be able to distinguish between between stupidity and truth. Oral Roberts was the forefather of the "health-wealth" movement that took the world by storm. Thanks to technology, i.e T.V., his ministry was accelerated and millions around the globe, for the first time, could experience "heresy" from the comfort of their homes. I have viewed countless hours of footage from past and present crusades, and I must say, he was an excellent actor. But that's all I can say positive about the man. I take the gospel seriously, and if his audience had, then Oral Roberts would have been just another name in the Tulsa World's obits.

Skip, this is hard stuff as far as I'm concerned. But remember what Paul said,

Some, to be sure, are preaching Christ even from envy and strife, but some also from good will; the latter do it out of love, knowing that I am appointed for the defense of the gospel; the former proclaim Christ out of selfish ambition rather than from pure motives, thinking to cause me distress in my imprisonment. What then? Only that in every way, whether in pretense or in truth, Christ is proclaimed; and in this I rejoice. Yes, and I will rejoice,
(Philippians 1:15-18)


Tony, you got THAT right! Our society just wants to be entertained! "perform for me; don't make me think".