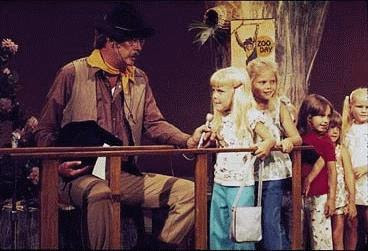 To those outside of NE OK, this story won't mean much to you, but Carl "Zeb" Bartholomew passed away this week. He was 78.

For 10 years, Uncle Zeb thrilled pre-school and elementary school aged children on KTUL-TV Channel 8, the local ABC affiliate, with "Uncle Zeb's Cartoon Camp". Uncle Zeb was supposedly the uncle of the show's precursor, "Mr. Zing and Tuffy". He was loved by children and I still have fond memories of watching his show.

My sister met Mr. Bartholomew many years ago when she was working for the March of Dimes. She said that she walked in his office and lost her professional demeanor when she realized who he was. She said, "Hey! You're Uncle Zeb!" (or something like that)

We'll be lookin' for ya, Uncle Zeb! 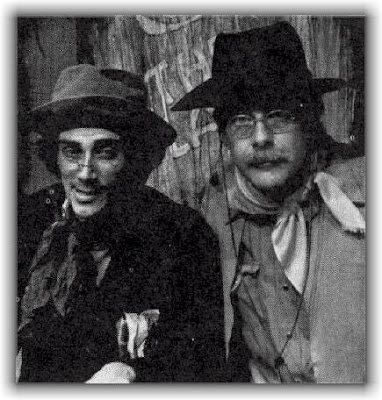 I wasn't from Tulsa but knew of Uncle Zeb and remember watching it when we visited friends here. (We had Foreman Scotty in Oklahoma City.)

We know the man that is in the photo with him. We were blessed at Eastwood to have Kent Doll continue sharing his character with our children. He lives here in the area and has a great family.

may he rest in God's peace and rise in glory!

In Springfield, MO we had "Aunt Norma." I was a guest when I was about 8 years old. At the beginning of the program everyone stood in front of the American flag and put our hands over our hearts. Aunt Norma looked at me (on live TV) and said "Bobby, will you lead us in the pledge?" I was terrified. I took a deep breath and began "Our Father, who are in heaven . . ." Aunt Norma took over at that point.
These people are wonderful. Kids today need people like them.
B & J S