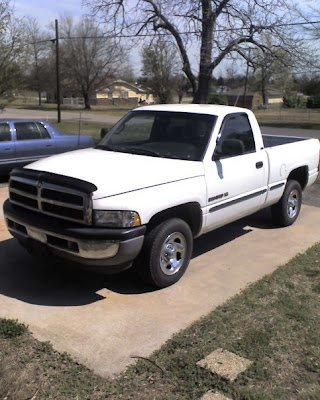 My "New" '98 Dodge Ram
Well, for the past year, on and off, I have been praying for God to provide me with a different car. I was kind of in the market for a truck, but also eying Sebring Convertibles... The last 3 or 4 days, I felt impressed to pray in earnest for a truck. So I did.

Today, I thought there was a Wagoner Ministerial Alliance meeting, but either I got the day wrong or I was the only one that showed up. I remember Sally mentioning an older blue Ford truck for sale at a used lot here in Wagoner. I decided that since my meeting was shot, I might as well stop back by the lot and take a look at the truck.

It was a nice old truck. 1981 F-100. It had a fairly new replacement motor. The old guy said it would be a reliable truck for me. As we chatted, he asked me what I did, so I told him. As we talked about the truck a little bit more, he mentioned that they had just received a new truck in yesterday and that it could be had for just almost the same price as this old truck. Well, it never hurts to take a look, so that's what we did.

It turned out to be a 1998 Dodge Ram 1500 Lariat. Clean as a whistle and seemingly nothing wrong with it. It even "blue booked" in as higher because of "low" mileage. I did some quick praying about it and called Sally and to make a long story shorter, the above truck is now mine!

Before I bought it, I took it by one of my church member's house to see what he thought about it. I asked him what he thought it ought to sell for and he said a price that was $4500 MORE than what I was going to pay for it. When I told him what the price was, he said that if I didn't buy it, he would!

When the dealer was making out the paper work, I asked him again what he knew about it. He said, "well, the thing I know for sure is that I just sold it way too low". (another salesman was the one who offered it to me at my price).

I told them all in the office that I had been praying for a truck and that they were the answer to my prayer. I was able to witness a bit to them and they asked me to pray for them!

God is so good! I sure am glad I'm not an atheist! (see post below) Also, thanks to my dad who is going to help me with it, too!
Posted by Rick Boyne at 12:37 PM