All Glory to God! 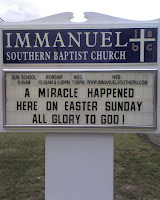 Easter Services are supposed to be focused on Jesus and the power of His resurrection. Yesterday, the members of Immanuel Southern Baptist Church in Wagoner, OK, got an object lesson to go along with the sermon.

Just before the services were to begin, the Sunday School Director, Marty Berryhill, was walking around the sanctuary greeting visitors. As she took the hand of a young man, she collapsed. It was supposed that she had just fainted. The young visitor motioned to his mother, a medical doctor, that there was a problem and the visiting doctor realized that Marty was not breathing.

Dr. Nancy Murphy, was visiting ISBC on Easter with her extended family to hear her nephew preach the Easter Sermon. Marty had fallen between the pews and it was impossible to get to her. The doctor asked for help and some members were able to move the pews out of the way. Nancy dragged Marty out into the aisle where she determined that not only was she not breathing, but her heart had stopped beating.

Immediately requesting someone to call 9-1-1, she asked if anyone knew CPR. Jeanine Loubier was tuning her guitar on the platform when she responded and assisted Nancy in administering CPR. The pastor met his wife, Sally, in the hall and she said she was on the way to call 9-1-1. The pastor ran ahead of his wife and made the call.

As the CPR continued, it became apparent to the doctor that Marty wasn't going to be revived. She later said that a very small percentage of patients are revived by CPR, but it is always worth doing. She called for all the children to be cleared, because she didn't want them seeing a dead body at church on Easter. The pastor asked everyone to leave the sanctuary and to go to the fellowship hall to pray for the situation. Sally was able to corral the members in the fellowship hall and began praying earnestly.

That's when the power of God was made manifest.

As the doctor later described, "Almost as soon as the people began praying, Marty opened her eyes and took a deep gasp for air. I was never so surprised to see someone come back to life as I was her!"

Marty was taken by ambulance to St. Francis Hospital in Tulsa, about 45 minutes away. The doctors there found a blockage and inserted a stint. By the time the pastor was able to visit last evening, Marty was alert, smiling, and even ordered meatloaf, chocolate cake and iced tea for supper!

As we sat there together talking about the events of the day, I told her what else the doctor had said. She said that as a doctor, she had ZERO expectations that she would be revived. As far as she was concerned she had died on Easter Sunday. However, the only way to explain what had happened was that "it was a miracle".

We were able to laugh about some of the things done and said during the crisis. As we talked, I mentioned to Marty, "you died this morning, but here we are laughing about death this afternoon". What an awesome God we serve that we can laugh about death! Marty died Sunday morning, but she should be released from the hospital Tuesday or Wednesday!

God gets ALL the Glory for this one!
Posted by Rick Boyne at 8:30 AM

WOW! Powerful illustration! Great example of what God can will do!

Sometimes, I wonder if he is amazed at just how small we think He is? After all, He did create the universe from nothing! He did raise Jesus from the dead.

We seem, me included, to be surprised when He chooses to work another miracle...maybe we shouldn't be.

I so totally get this after my experience last month at my grandma's bedside. What was "dead" (CT scan evidence) in my grandma's bowel and all her other organs that were no longer getting necessary oxygen to thrive were suddenly pronounced "alive" the following day in my presence. I was the only one at her side and the doctor turned to me and proclaimed this should NOT be. I asked her if this was where medicine and faith conflicted to which she replied, "YES."

What a wonderful Easter, Rick. God planned for your people to get something far greater out of the day than even you could have imagined!

And just when you thought that God was busy over here; He showed up at your door and tap you on the shoulder. Brother, we love you and continue to pray for your ministry and God's power on everything done there.

What an amazing story!! Praise God for his miracle on resurrection day. He does have a way of reminding us that He is the giver and sustainer of life.