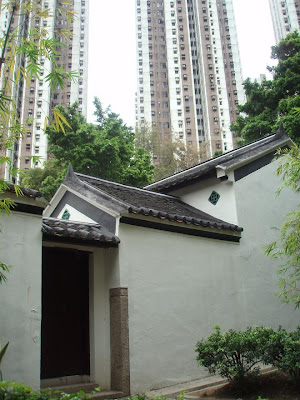 Since we only have 8 days left before leaving for OK, I took the opportunity today, while Sally was at the doctor's office getting a check up, to go out to the New Territories to Tsuen Wan to see the Sam Tung Uk village. It is a 200 year old Hakka walled village built by the Chan clan. It was completely restored in the 1980's and is now a historical monument in HK.
While I was out there, Sally called and said she was through at the doctor so, she decided to join me for lunch. We found a little place that sold Chinese dumplings and noodles and decided to try it. They only had soy milk to drink and no English menu. We did the best we could and ended up with a very nice lunch.
This is something that we said we were going to do each week before we came to HK, but as it turns out, we only did it once or twice. We'll have to get in the habit of exploration when we return to HK in January.
Posted by Rick Boyne at 7:17 AM