Most likely, by now, most people have heard that there is "some preacher who is predicting Jesus' return on May 21" and you might be wondering, "What's up with that?"

Well,here's my 2¢ about Harold Camping... 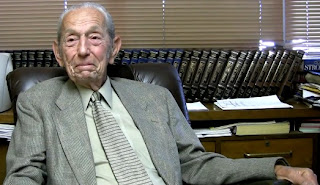 Now, I can't judge the intentions of his heart, obviously, but I can evaluate what he is saying against what God's word says.


'But the prophet who speaks a word presumptuously in My name which I have not commanded him to speak, or which he speaks in the name of other gods, that prophet shall die.' "You may say in your heart, 'How will we know the word which the LORD has not spoken?' "When a prophet speaks in the name of the LORD, if the thing does not come about or come true, that is the thing which the LORD has not spoken. The prophet has spoken it presumptuously; you shall not be afraid of him.
(Deuteronomy 18:20-22 NASB) 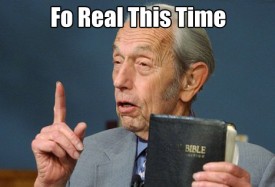 Second, despite his arguments against what I'm going to say, Matthew says:


But of that day and hour no one knows, not even the angels of heaven, nor the Son, but the Father alone.
(Matthew 24:36 NASB)

He claims that this particular passage is misunderstood and we CAN know when Jesus will return.

Camping arrives at this particular date because he says it is exactly seven thousand years after Noah's flood.  He claims to have special understanding of God's word that has given him insight into the mysteries of God. 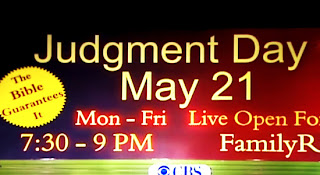 RUN AWAY, CHILDREN!  RUN AWAY!

At the heart of the matter is a great truth; Jesus WILL return for His bride. We just don't know when that will happen.

Personally, I happen to think that it is MUCH closer than many people are willing to think.

While we can't know the day of Christ's return, Jesus tells us this:

Now learn the parable from the fig tree: when its branch has already become tender and puts forth its leaves, you know that summer is near; so, you too, when you see all these things, recognize that He is near, right at the door.
(Matthew 24:32-33 NASB)


For the coming of the Son of Man will be just like the days of Noah. "For as in those days before the flood they were eating and drinking, marrying and giving in marriage, until the day that Noah entered the ark, and they did not understand until the flood came and took them all away; so will the coming of the Son of Man be.
(Matthew 24:37-39 NASB)


Therefore be on the alert, for you do not know which day your Lord is coming.
(Matthew 24:42 NASB)


He who testifies to these things says, "Yes, I am coming quickly." Amen. Come, Lord Jesus.
(Revelation 22:20 NASB)

And to that, I humbly cry, "Maranatha! Come get us, Lord Jesus!"

Of course not!  I'll be the first to apologize to him and to my Lord for not believing. Why would I be upset? I'll be in the presence of Jesus!  I HOPE he IS right!

I guess we'll find out on Sunday.  If you don't hear from me on Facebook, Twitter or on this blog by Monday or Tuesday, I have either died, or I have been taken up with the Lord.

If I died, please don't cry at my funeral; I'm in the presence of my Lord! :)

If you choose Jesus, you will suffer incredibly at the hands of those who are of this world, but do not give up or give in. If your faith is in Jesus, you are on the winning side.  Jesus will return, once again, to fight the leader of this world.  I've read the last chapter; Jesus wins!
Posted by Rick Boyne at 11:56 AM

He'll come back, I've heard, at a time when we don't expect Him to. So nobody expects His return on the 21st, now that Camping has predicted it, so......

I actually thought the same thing, but simply failed to include it in the post!