Today, Sally and I had lunch at HK Hard Rock Cafe. They have a great affordable lunch special. Anyway, they were playing their ususaly HRC repatoire of rock songs. We even watched "Le Freak". Being the people watcher that I am, I simply noticed that during the music videos, most people continued to talk and eat and would OCCASIONALLY look up at the video. However, they played Elvis singing "Jail House Rock" from his '69 Comeback Tour in Hawaii (the one where he wears the black leather suit). I kid you not; the whole restaurant got quiet as everyone's attention was focused on "the king". 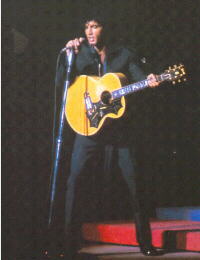 It is amazing to think that a 37 year old music video of a man who has been dead for 29 years could still command the attention of an entire restaurant of people.
Posted by Rick Boyne at 7:08 AM