I watch KOTV for my weather news from the Tulsa TV market.  I really like their weather team, Travis Meyer, Alan Crone, Dick Faurot, and Mike Grogan. I trust these guys.

I know they do their very best to create accurate forecasts and present the public with up-to-the-minute updates when severe weather approaches. It's hard to do it, too, because weather predicting isn't an exact science; things change.

Take today, for instance. They've been telling us for the past several days that there is a good chance of severe storms this afternoon.  They've shown us graphics about it, blogged about it, and posted updates on Facebook and Twitter.

They really want us to take this seriously.  And, as an Okie, it "feels" stormy today. 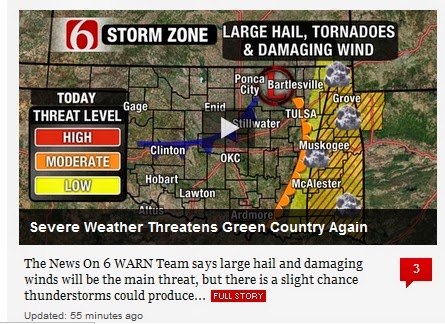 (While I was typing the second paragraph, the National Weather Center in Tulsa issued a tornado watch for my area)

Last week, they told us all week about a storm that was coming in that would bring rain to our area. They showed us radar images from the storm that was still out over the Pacific. They presented us different frontal models several days in advance. The morning it was supposed to storm that afternoon, it was unbelievable that it was going to rain that afternoon. It was bright, sun shiny, and not a cloud in the sky.

Yet, because it was from the News On 6 WeatherTeam, I prepared for rain.  AND RAIN IT DID!!!!  A certified frog strangler.

It got me to thinking.

Why do people believe a forecast for rain and make plans around it, but completely ignore the words of Jesus where He says He's coming back to Earth?

Some people have made some fancy charts and others have erroneously predicted the exact date (which Jesus said would be fruitless to do), yet the "prediction" that He will return stands.

So far, we've had all the time in the world to prepare for the return of Christ. There are signs exactly according to the Bible that we are getting close, yet people treat it those predictions worse than promises from a disgraced politician.

Folks, it's getting close. I don't know when exactly, but, if we can look at the sky and know it's going to rain, we ought to be able to look at the signs that the Bible lists and know that it won't be long until Jesus returns.