Earthquakes in Oklahoma and the End Times

Well, Oklahoma has recently been in the news with some earthquakes.  True, we have very small earthquakes everyday, but the recent ones haven't been small and they were felt as far as 1200 miles away. 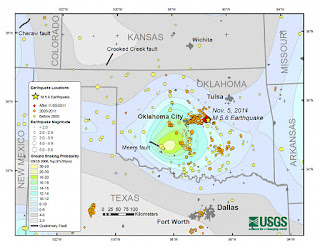 Some are blaming these recent quakes on fracking, or the practice of petroleum companies to fracture the ground allowing access to trapped gas and oil...

Others are blaming it on geology alone.

I don't know. And I don't really care.

I know that I've felt five or six of them since they started last weekend.

For many Okies, these are the first ones they've ever felt and are extremely distressed by them.  Even during the "biggest" one (5.6 or so) none in my immediate family were distressed.  A little excited perhaps, but not distressed.

It has also been interesting to see  people positively claim that the earthquakes have nothing to do with the events of Matthew 24.  There are others that are convinced that because of these earthquakes, Jesus will return any day now.  In fact, because of both of these statements, I'm going to be preaching on Matthew 24 tomorrow.  (Here's the link to that sermon, if you're interested)

And Jesus answered and said to them, "See to it that no one misleads you. "For many will come in My name, saying, 'I am the Christ,' and will mislead many. "You will be hearing of wars and rumors of wars. See that you are not frightened, for those things must take place, but that is not yet the end. "For nation will rise against nation, and kingdom against kingdom, and in various places there will be famines and earthquakes. "But all these things are merely the beginning of birth pangs.
(Matthew 24:4-8)

I've also read comments (on Facebook) of people being VERY critical of individuals and churches who make any reference at all to the events in Matthew 24 in relation to the earthquake events here and around the world.  They were condemning the use of "fear" to bring people to salvation.  However, that goes against Scripture:


And pity some, making a distinction. But save others with fear, snatching them out of the fire, hating even the garment being stained from the flesh.
(Jude 1:22-23)

So, what then? Should we trying to scare the Hell out of people so that they'll be saved?  Or should we only preach love and kindness?

Personally, I think those are good questions. And I think the answer to those questions are addressed in Jude....

I'm not afraid or ashamed to tell you.  Obviously, I have no "special knowledge" from the Lord. But I'm smart enough to see the world changing at an alarming pace.  I'm smart enough to "read the signs."  My position is: I can't believe we are still here.  I honestly thought we'd have been gathered in the skies this summer....

But, the deal is this: since we "do not know the day or the hour" we must heed the words of Jesus:

"Therefore be on the alert, for you do not know which day your Lord is coming.
(Matthew 24:42)