My Week at KBA

I volunteered to do any job that no one else wanted to do, or the job that needed to be done. I'm not sure which category it fell into, but I was asked to "do" security at KBA. Having "done" security at our big meetings overseas where we hire two dozen locals to be security guards, where we constantly are concerned with agents from unfriendly countries trying to work their way into our meetings, and where we have consultants come from the US to assess our security strengths and weaknesses, this would be a piece of cake! 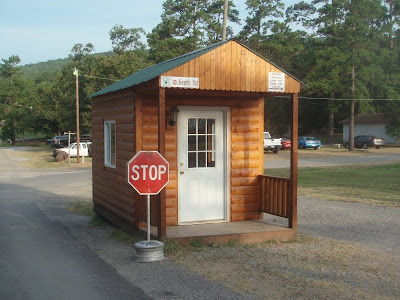 This was my "office" for the week. 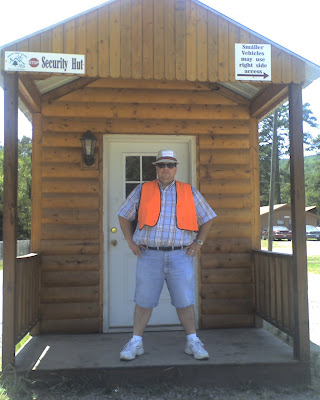 I worked all alone the first day, registering vehicles and handing out security passes. It wasn't fun in the 103 degree weather, but someone had to do it. The first day, the A/C in the hut didn't work very well and I really did think I was going to have a heat stroke. But, some wonderful ladies from one of the churches had pity on me and brought me some ice water! PTL! 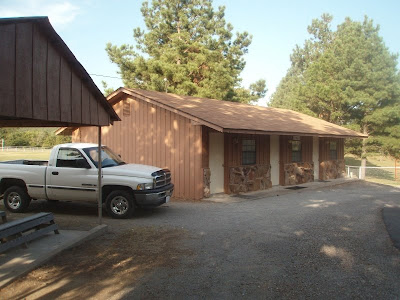 Because I was working "security" I also had to "mind the front gate". This meant that I opened it in the morning and closed it at night. If anyone needed in our out after hours, they came through me. My motel room was the on at the end on the right. One night (or morning) at about 3 am, I had a knock on the door. I was in a drooling dead sleep, but was aroused to take care of it. I heard the men say that they had a camper "with really bad gas" and they needed to take him to the hospital. Well, it was three in the morning; I wasn't going to argue or question the need to take a kid to the hospital over "bad gas". As it turned out, the kid had fallen off his bunk and had a "really bad gash" and needed some stitches. Well, you try.... 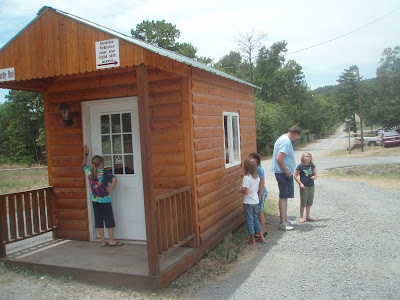 Throughout the week, the kids were given clues to find colored beads in which to make a witnessing bracelet. Wednesday was the Security Hut's day to give out green beads. Almost every kid in camp came by to ask for green beads. I pretended to misunderstand them and told them that we didn't have any green beans. It was a lot of fun. Later that afternoon, the fire department showed up and asked where the fire was. We were unaware of one and they said there was a report of a forest fire threatening our cabins. That threw us into high gear and we chased all over camp looking for it. On the far edge of camp, we came across someone (on the outside of camp) who was burning trash. A far cry from a forest fire. We were very impressed, however, that two fire trucks and a bulldozer showed up to protect us and the forest! Thursday afternoon, for the first time in camp memory, we had to send everyone to their cabins because of a severe thunderstorm that came through. It was pretty scary (especially in that small hut) with the 60 mph winds. We had a branch get torn off a tree and it fell on a car, but not any real damage.
Posted by Rick Boyne at 9:32 AM

In 1962 I went for my one and only church camp somewhere in Nebraska. A few days before we left I discovered that my Mom had been asked to go and help. I just knew my fun week would now be a dull week with Mom watching me. Wrong. Mom manned the snack hut, and 'sold' cokes, nehi orange drinks, and oreo cookies all week. She was the most popular person there as the temps were over 100 every day. My week wasn't so bad after all.
B & J S