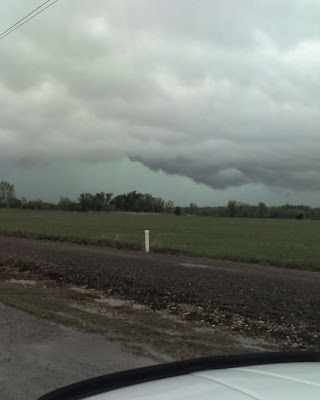 What a May Day it has been! (btw, the title of this post "m'aidez! m'aidez" is French for "help me", which sounds like mayday)

I started out early this morning to go fishing with Dad and my cousin. They said the sand bass were really tearing it up this week on Lake Hudson, in NEOK. I knew it was supposed to rain, so I dropped by Wal-Mart on the way out of town to get a rainsuit. As I approached Chouteau, Ok, the clouds began to look ominous. I pulled over in the parking lot of the local IGA grocery store and watched the storm for a little while. I even was able to get a picture of lightning on my cell phone! 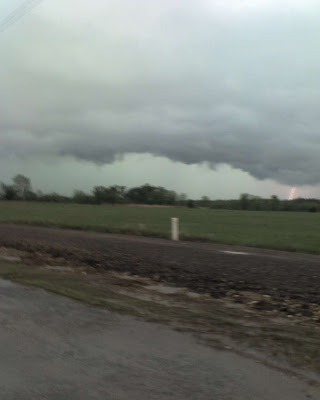 The storm was moving from West to East, but the clouds were moving from East to West. They were some really scary looking clouds! You never want to see greenish-blue skies in Oklahoma; that means that there is hail involved. I got really concerned when I saw the lowering on this cloud below... 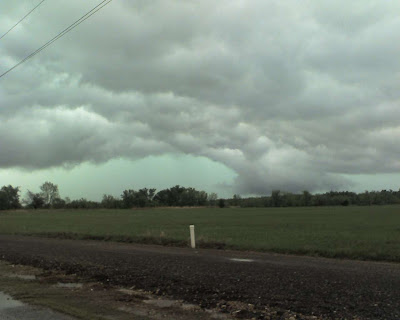 I went ahead and drove on to the lake, not knowing how bad it was where Dad was. I tried to call, but he didn't answer. As I got into Pryor, the rain was torrential and the streets were flooding. I later found out that there were 5 1/2 inches of rain that fell in less than two hours. At one point, a passing truck pushed a waved that actually went onto the hood of my truck! 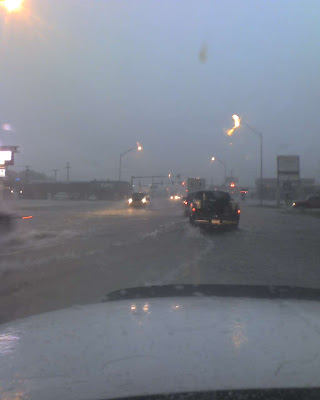 I got through Pryor and Dad called. He said to not bother coming as the road into the campground was flooded and there was no other way in. I certainly didn't want to go back through Pryor, so I went on to the next little town, Adair. (I found gas for $1.73, so I filled up!) I decided to go back home the very long way, which was to take a rural highway to the Interstate and use the Interstate system to get back to Wagoner. As I got out of Adair a little way, the highway was flooded and a fireman was there in his truck to warn people. I asked him about it and he said the water was 4-6 inches over the road and they were getting ready to close it. I asked him if I could get through and he said to "be careful".

Well, as I came out of the water, it seems that some stuff got wet. My truck's overdrive and cruise control neither work now. Hopefully, it is just on account of being wet. We'll see.

Needless to say, everytime I try to go out of town for anything, it turns into an adventure.
Posted by Rick Boyne at 11:52 AM

LOL! Most people have fishing stories that include tales of catching fish. All you ever catch is ... well, I don't know. The stories ARE always good though.

I heard HWY 20 was closed in Pryor, Claremore was underwater, and that in Adair, HWY 28 was closed. Sounds like you wanted to visit all those places today. Not enough excitement in your little town, Ricky?

Yeah, It seems like half of your blogs are about crazy weather!