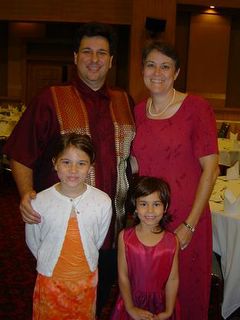 Our Family Picture at the Wedding

I know, "Christian" and "Thai" don't go very well together, for the very essence of being "Thai" is to be Buddhist. However, my younger daughter, Emily, was invited to be a flower girl at a wedding on Saturday. She did a great job. We didn't know the people who got married. (One of Emily's schoolmate's mother is friends with the happy couple.) When Christians get married here in Thailand, a traditional Thai wedding is simply out of the question because it is nothing but a huge Buddhist ceremony. Christians here have adopted a western ceremony. It is very close to a North American wedding but there was one thing that I have to say I really enjoyed seeing. Just before they were pronounced married, they both went to both sets of parents, knelt in front of them and received a blessing from them. It was really meaningful and I would love to see that sort of thing in American marriages. Very touching. And this from a guy that doesn't like to go to weddings in English!

Anyway, I was proud of Emily for doing such a great job!
Posted by Rick Boyne at 1:34 AM