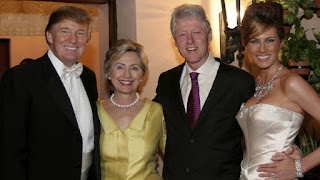 Is this the end?

Well, not quite, but we're getting mighty close, in my opinion.

This is the most important election so far. In the history of America. Yeah, I said it.

I know. Lot's of people are saying it, too, but I actually mean it and believe it.

First of all, let me say that I'm getting really, really tired of my vote for president being a protest vote. Oh! How I'd love to have a candidate that I actually supported! But it ain't happening this year. Again.

For all the young people who can't stand the thought of Trump being president because they don't like him as a person, let me tell you a little bit about Hillary, (although I shouldn't have to). Actually, I'm not gonna just tell you; you need to research some things, too. So here:  google.com

and last but certainly not least, and perhaps the most infamous, treasonous reason:
And don't forget her mysterious health issues that they emphasize is not an issue....

But the biggest issue I have about HRC, besides her integrity, loyalty, health and abilities, is the fact that the next president will most likely appoint up to four new Supreme Court Justices in their first term. With Hillary and her ideology, this scares the snot out of me!

Now, to be fair, Trump isn't without his problems, too.  But they pale in comparison to HRC. He calls people names and is rude. He lost nearly a billion dollars twenty years ago. But come on people! He had a billion dollars TO LOSE!

He is brash. He says what's on his mind without thinking (or so it appears).

So, let's now take a look at those who would be just a "heartbeat away" from the Oval Office: Mike Pense and Tim Kaine. (I wish it was Pense running instead of Trump). In any case, Kaine is simply a mini-me for Hillary and Pense appears to me to be the real deal. Plus, if there is any way possible, Kaine is more rude than Trump!

So it comes down to this in my opinion: Hillary would make Obama look like a good president. If you voted for Obama just because of his race, I hope you learned your lesson. Please don't vote for Hillary just because of her sex.

Hillary; you just can't trust her.
Trump; at least he doesn't want to destroy America.