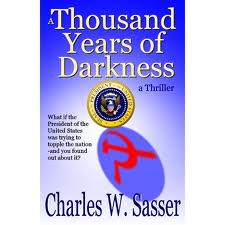 I received my autographed copy from the author in a web contest. He claims he wrote from "today's headlines." He said that in 2011, but the problem is, much of what is going on in 2012 is also in the book!

Sasser's fast-paced action keeps the reader's attention. The reader can readily identify with many of the characters.  The interjection of "press releases" and quotes intensifies the suspense.

Billed as "fiction", it is an accurate portrayal of what the current administration's second term could be like, if re-elected. It should be required reading for all starry-eyed young liberals, and for all who tow the party line. I would recommend this book to every American patriot before it gets banned as subversive!

Order A Thousand Years of Darkness on Amazon.com
Posted by Rick Boyne at 11:49 AM