Sally and I took a trip to Dallas this weekend.  The purpose was to go to a wedding of a couple, both of whom I've known since they were two years old.

We found a Middle-Eastern restaurant in Richardson.  It's called Afrah.  I would highly recommend it to anyone who happens to be passing through. 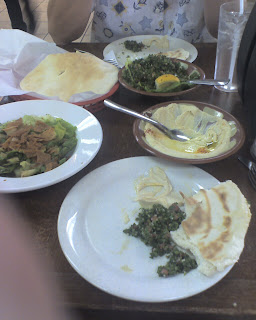 The humus, tabbouleh, and lamb were out of this world. The Shish Tawook (Chicken Kabab) and beef kababs were decent, but not as good as Chez Abou's in Abidjan, Ivory Coast.

I also had Baba Ghannouj, but since I really don't care for it, I shouldn't comment too much about whether I liked it or not.

The people were friendly and you were welcomed by the owner at the door. 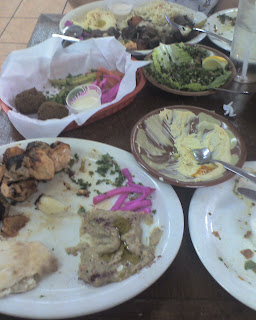 We ordered WAY too much, but it was really very good!
Posted by Rick Boyne at 1:39 PM