Twenty years ago today I entered China for the first time. I had gone to Hong Kong to visit some friends who were teaching English in China, and took a day trip into China. Those were the days when even in Canton (as it was still pretty much called by everyone) that there weren't too many white faces and back when they had a whole separate currency for foreigners, the FEC (Foreign Exchange Certificate). It was illegal for foreigners to hold and use Renminbi but the exchange rate from US Dollars to Renminbi was about 60 RMB to 1 USD! (now it is about 7 to 1)

I suppose, because of the anniversary, I am waxing nostalgic. So much has happened to me since that time, but even more has happened to China since 1988. Not much is the same. A couple of years ago, I returned to Shanghai for the first time in 18 years or so. It didn't even look like the same city. The only part that looked the same was "The Bund". But even then, people weren't looking at the old buildings any more; they were looking across the river to the Pearl Building, etc.

That first taste of China changed my life. When I lived in Hong Kong in 1989-91, I made many trips back into Guangzhou (Canton) to distribute Bibles and other Christian literature. It was a dangerous business back then. They had a customs form that asked if you were in possession of the following items: drugs, guns, pornography, Bibles. I was always honest and told them about the Bibles. When they asked about it, I would show them my personal Bible and speak very fast English and tell them about all the other Bibles I had in my bag. With much prayer, they never even once looked in my bags. 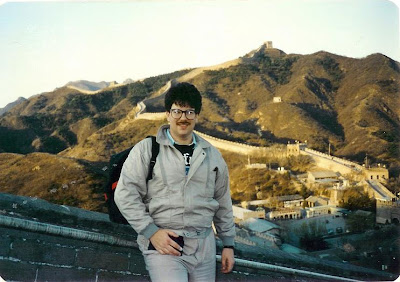 Rick at the Great Wall in 1990
Take a moment and pray for the people of China. They have been told "There is no God". But, many know better. They know that there MUST be a God, but they don't know Him yet. Pray that the Gospel of Jesus Christ would be spread all across China like the Good News that it is.
Posted by Rick Boyne at 10:07 AM

Thanks for sharing this.

I am just going to start referring to you as "the Stache with the stash".
Seriously, cool stuff.

I was in China for two years 91-93 Nanjing. I was also in China in the summer of 90. We could share a lot of stories.
BSU Buddie in Christ,
Katie

I just now, for the very first time, saw your comment! I am so happy that you took time to comment. Please do so again!!!