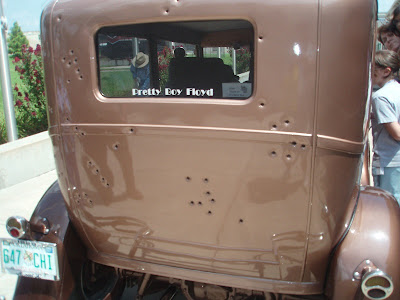 We took a family trip to the Three Rivers Museum in Muskogee this last week to see a car reputedly owned by Charles "Pretty Boy" Floyd, a notorious Depression Era Oklahoma outlaw. Supposedly, he used it in a "get-away" where the FBI fired over 90 shots at his Model A. There are over 50 bullte holes still in the body of the car. The current owner said that during the refurbishing of this car, 4 or 5 slugs were pulled out of the fuel tank and many were lodged in the front dash and even in the radiator. Pretty Boy Floyd and his accomplice were protected by two inch thick steel plates in each seat back.

Floyd evidently abandoned it in a creek then it just was forgotten. The current owner found it and started the restoration process and now shows it at museums and car shows. We thought it was pretty neat. Especially since my grandpa told me that he changed either a water pump or a fuel pump for Pretty Boy Floyd back in the late 20's/early 30's.
Posted by Rick Boyne at 9:56 PM

The Davis family has a story to tell. Grandpa was a lawman, a chief of police. HOWEVER, he was also thought to at times be a little bit of a law"less" man. He was always bringing guests home to stay the night. One visitor came late rather late and left in a hurry early the next morning. Granny was cleaning the bed when she found a gun under the pillows. People didn't leave their "arms" behind in those days unless they were leaving in a rush. ANYWAY, their guest was Pretty Boy Floyd.