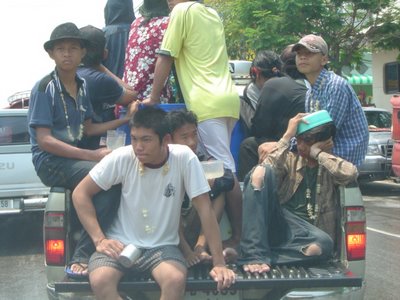 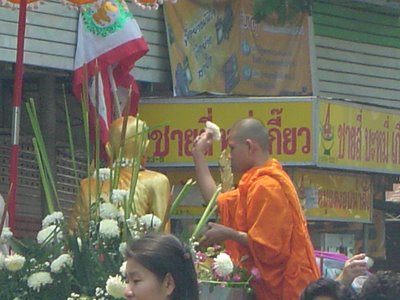 Well, the day is fill with the Songkran Water Splashing Festival. It started with "sprinkling" idols of Buddha with water, then, progressed to sprinkling others with water. However, now, it is an all out water war! We watched as groups of people in backs of trucks drove around dumping buckets of water on other truckloads of folks, motorcycle drivers, and groups of people waiting by the side of the road to do the same thing! We accidentally got in the thick of things and ended up in the Songkran parade. It was actually pretty neat, as we saw some of the roots of the festival, as evidenced in the lower photo (above). We enjoyed watching people get absolutely soaked. The top photo shows that folks get exhausted having so much fun. The one guy, looked like he was taking a nap! (bucket head guy)